The school of Telendos and its great history!

The teacher of the small school on the edge of the Aegean, in the beautiful island of Telendos, arrives daily in his yard from Kalymnos. But when the weather is not good, the teacher cannot approach the small harbor. And lessons cannot be done.

Telendos is an island, very close to Kalymnos. Once, the two islands were united, but a powerful earthquake in 535 AD, separated them. Today, in the years 2018, the tiny islet has two stable fourth-grade pupils at school. And there are seven students in the first and last months of the school year. “Permanent children are two in primary school. The rest are the first three months and the last two of the school season in Telendos, because their parents are working on the island. Due to the tourist season and because we have children who go to high school, we have to move the remaining months in Kalymnos, “says Poppy Harino.

Poppi originates from Telendos. Her grandfather and her father grew up on that island. Poppi has two children. The older one goes to the 2nd grade of high school and the little one to the 2nd grade of primary school. So they are forced because of the older one, to move to Kalymnos in the winter months because the small island does not have high schools. While for the time they stay at Telendos, the older, goes to Kalymnos for the English lesson. Poppies, apart from a small-scale cook, have become a professor on these months. And as she is telling us: “I’m between the kitchen and the books. To help him. It is very difficult, but I cannot do otherwise because of my job. Although that the problems are a lot, we are fighting for the best”.   The positive thing is that there is still a school, on Telendos, as long as there are students on the island. The little humble school of the Aegean will continue to have life.

However, the elementary school of the island has a special story. After World War II, Kalymnos City Hall tried not to leave without education the children even in the most distant villages on the island.  The Primary School of Telendos – Kalymnos was, founded in 1945. It is worth mentioning that the Kalymnos Town Hall had a sufficient number of educational institutions during the German occupation. The City Hall, did not think of the money, but the main concern was that the children of Kalymnos had to be educated and, above all, to think Greek. 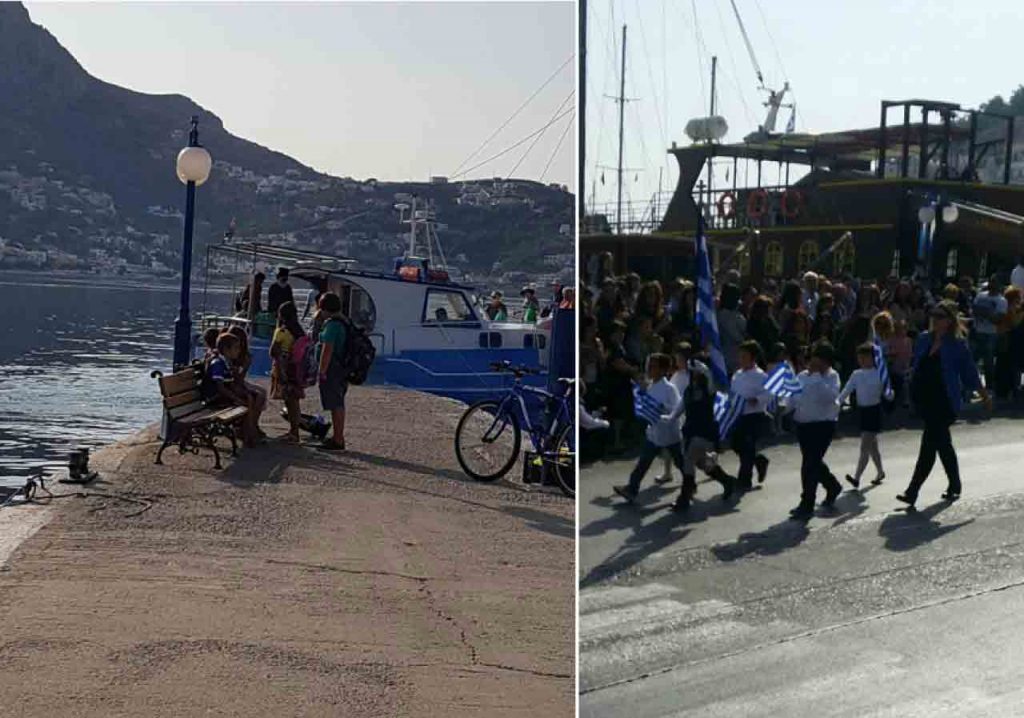 At the beginning of the school year, small children of the small island in the port await their teacher. And a snapshot of the parade of the school that took place on the island of Kalymnos.

In the first year of operation of the Telendos Primary School, the teaching was done in a cell (small house) next to the church while the teacher was paid by the City Hall, with which he was contracted. The following year, the Municipal was housed the school a house 100 meters away from the first location. In 1947-1948, all teachers were paid by the Greek State. For 11 years the school was housed in the house. Later and after actions of the active teacher at that period, the school building was built behind the Holy Church of Panagia.

The new school, first operated in 1959, consisted of a small anteroom, an office and a classroom. From the small island many talented teachers of the past have passed. With a lot of love, for the place and for the children.

In that school Sevasti Duna was also a pupil. Sevasti remembers that 30 years ago the school had eleven pupils. “I have good memories. The school from my home is not even a minute’s walk away. We were eleven children at that time. Very close between one to the other. We were playing a lot. I did not have a very good relationship with school. My mind was always in the courtyard of the school. And not inside. I just liked to go because it was a place that gathered my friends. Beautiful memories. Children growing up in small societies. They live simply. They enjoy the whole scenery around them. Nature, games. Today, however, the school has only two pupils. They need company. It should be at least four so they could play better. It is boring for the children” says Sevasti and she is adding:” Maybe my child will not find the school operative … because if it will stop operates, it is going to be very difficult to be open again “.

For the children of Poppi, Telendos is their small paradise. “How could it not be, since the whole day’s program is playing, and swimming to the sea?  There are kids everywhere … The island is changing completely during the summer”. It is transformed. It becomes alive again. The think that Poppi fears most, is see that little school to be closed.  “That closure in Greece it means that is not going to be open again. Unfortunately we have seen that happening in many schools. We have to keep our islands alive. Especially the small ones.  And the only way to keep our land alive is our children. As long as even the smallest school is alive, there is going to be hope”.

«Island weddings, a touch of dream» by Paraskevi Antonopoulou
“On The Rocks, Telendos” or the “princess” who peeps at Kalymnos?