The Best Factory on Earth, inspired by a Woman!

If you have persistence and a great love for what you are doing, you can achieve anything…This is especially so if you are in the company of “MERAKI PEOPLE.” This venture is unlikely to fail, even if some insist it will. Greece, too, has shown that it has people with the minds to come up with innovative ideas in every field,especially if they have the same vision and methodology..

That is how we met Christina Yardikioti, director of an important venture: the manufacture of the  first natural factory on earth! This may sound utopian, even crazy. However,she has the argument and concrete results of others abroad in order to guide us to the original result.

The First Natural Factory in the World Based in Greece!

“From October 21 to 23, we will prove to everyone’s surprise and to everyone who believes nothing can happen  Greecethat something can happen. Scientists, health professionals, people from the field of medicine, all of whom have a lot of knowledge, are in Kariess in Arahova of Lakonia. They will pass down their knowledge and inspire people on this innovation, on a new beginning through nature and local growth. MERAKI PEOPLE, an unofficial group of people working on the local development of Parnona, has organized this meeting together with WHIS. This is a company whose charter included social enterprise. It also has representatives from all over the world. It chose to have their second summit in Kariess, Lakonia instead of in San Francisco or Rio de Janeiro. This both says and means a lot,” says Christina Yardikioti on Humanstories.gr.

However, how did the idea for a natural factory come about? Mrs Yardikioti was influenced by her father. “While on the balcony of my house, which is near the sea, I would always listen to my father. He would ask,’Children,is  there productivity because if there is no productivity there is no wealth and well being.’ Those were words coming from a man who had employed 1,200 people. That way, we do not want rubbish in our forest.That is, we mimic nature and work with it. 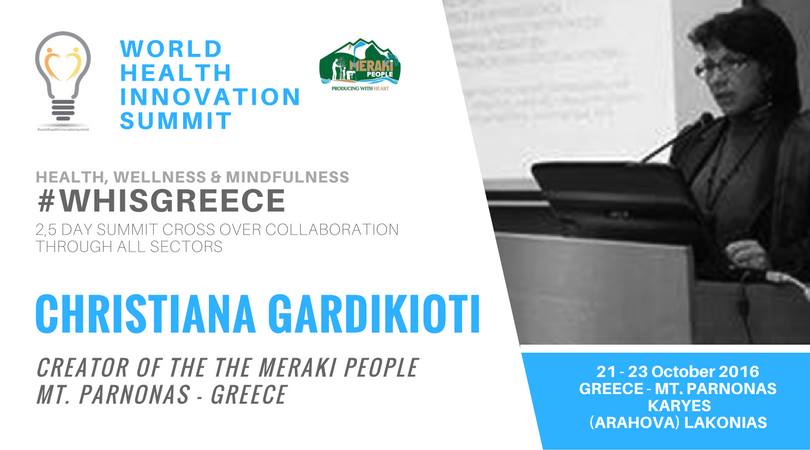 The Innovation Poster Exhibition to be seen in Kariess, Lakonia this October…

The Many Growth possibilities of an Innovation through “MERAKI PEOPLE’’

We hope we will have a general well being. As is evidenced by the title, the group MERAKI PEOPLE, these efforts do not mean real capital but social capital. The faster we get a group of people to believe in this original venture and apply it, the more likely we will inspire others to see and try it. If we lay the foundation for the first village where nature will act as an employer, then we see how fast we can create productive processes in the villages nearby.”

And she continues with an indicative example: “Our first meeting was in Saint John Kinourias at the village coffee shop, which was anti-productive. This area turned into a hearth of productive thought and business planning. This has never happened in Greece before. A small, local group, which meets every month, was  created  this way.  Moreover, someone who came from abroad said that a social enterprise will function in his country and it produced 400 members and 70,000 poundsterlings in the local community. One man approached me and established a mushroom productive unit in his country of Bombay. He provides jobs for 1000 women. As you can see, we did not discern the small change in Sain John’s, but we did see a huge change that was magic.

“Therefore, we reverse the phrase, ‘We do not have money and we cannot do anything.’  We say we do not need money to start something dynamic, but the right people.  Youhave  to work very hard to reach your dream. People must believe all this is done for their own good. We want  to create a reservoir of thought having to do with the economy of kneading and which is original and unique. Anyone interested in creating such an economy in their country should visit this village every year to learn the way.”

The Economy of kneading with a Background of Greek Villages

What is the economy of kneading and its prospects? Christina Yardikioti explains the natural way of the growth of this processes: “The enzymes help to start a new procedure and to turn a huge mass into something else that is useful. For example, a kilo of flour and and ten grams of yeast and you have enough to feed twenty people. That  is such a small amount of yeast  that helps with the final product.  Right now yeast is produced in an artificial way. We want to produce it in a natural way as was done in the past. Cheese was made with live material, not ready-made yeast. The same happened with bread. I remember my grandmother would add basil in water to produce leaven. You take small natural leaven  and make very tasty products with the discrete identity of a place. This specific leavendoes not exist anywhere in the stomach of a sheep in Kariess. You make something unique.

“Our goal is to get people who have lived in mountainous societies for thousands of years and who have amazing knowledge of livestock in their DNA. We can then juxtapose them with Greek universities and economics  schools, the village coffee shop and create the economy of kneading.

“Did you know that people overseas make bricks out of mushrooms? Do you want us to do the same? I asked the residents of the village and they started to think. I also explained to them they could make leather from mushrooms  and not rom chemical wastes from animal skins. Instead of thinking that nothing can be done in Greece, some people scratch their  and try to think of new ideas.”

“All of this  that we are presenting is a social experiment. Like academics, we must go  to the laboratory and see the conditions to create something. The fact that forty-four important people will go to Parnona and that they will have a constructive dialogue with the local people will give us the chance to see what will happen. The results  may make a great impression on both us and the scientists. We embrace uncertainty since we are doing the experiment. However, it costs nothing . What is more, there will be quality tourism. Every year there may be one thousand people who gather to talk not only about the economy kneading but about much more. All of this will happen in Kariess and Arahova in Arkadia in a  symbolic area. It is where the Kariatides, even before those of the Parthenon, played an important role for institutions. They protect the graves of leaders in a simple but effective way,” said Mrs Yardikioti.

Read the program of the Summit for Health Innovation