The Other Languages” and Elisabeth H. Grigoriadou

Elisabeth H. Grigoriadou comes from the prefecture of Kozani. In fact the inhabitants of the village where she is from are going to be rehoused after years of petitioning on their part. The reason? Because it is located close to the mines which are open excavation sites with a depth of more than fifty metres, and they are having disastrous effects on the health of the inhabitants. “In every family there is at least one person who is suffering with cancer. Cancers which mainly have to do with the respiratory tract,” Elisabeth tells us, and she continues “I haven’t lived in the village since I was fifteen. It still hurts me to know that my village will be lost however. I can understand how the residents feel though. I am going to lose the place of my childhood whereas if they stay, they will lose their lives.” Today, Elisabeth lives and works in Athens. She works as a teacher in Secondary education. One evening on a veranda looking over the Aegean Sea, Elisabeth tells some friends one of her stories; “The Couple.” One of the friends who was there said, “Why don’t you write it?” Up until that point she had never written anything. Nevertheless, that encouragement by her friend became the reason she started a seminar on creative writing a few years later and which led to the writing of her first book. “The Other Languages.” https://www.facebook.com/oiallesglosses/

“I had collected some stories, unrelated to each other, when I heard the story of a neighbour who had been a child during the Civil War and who had lived in Hungary and the former USSR. I had known her all my life but it seemed that now was the right time for her to talk to me. But even there I needed more in order to write a short story. The stories I write need time. I leave them in a drawer and then revisit them after some time.  When I realised that I could find a common thread to connect all the stories, I had to create an outline, with dates and change a lot about the characters and the events. Truly tailor-made. The title of the story and of the collection of short stories “The Other Languages” is due to the fact that I do not like the term “Foreign Languages.” When you learn a language that is not your mother tongue, you learn the language of “another person” that is to say, you wish to understand his mentality and his culture. You do not feel him to be “foreign” and so the language is no longer “foreign”.”

The stories in the book “The Other Languages” are fiction. “Some are based on true events, but others are not. There are stories which I heard as a child such as “The couple” or incidents which occurred to relatives of mine, like “Let’s go in my car.” The initial idea was an incident which could be described in three or four lines. In some cases the event was described a little more. Starting with the initial idea then, I used what I know, my experiences, what I have read and what I would like to have happened to create my own story. It is not a coincidence that I do not name the village specifically although I give details about Athens and Boston. I wanted to create a mythical village, taken to a large degree from my imagination,” explains the author, Elisabeth H. Grigoriadou.

Elisabeth’s short stories are mainly about the period during the Civil War in Greece and particularly the villages of Northern Greece. Civil War is the harshest war that exists. I didn’t live through the Civil War of course but I wanted to write about the atmosphere and the relationships between people in Greece after the war, with my village as the point of reference. I was in Primary school during the Dictatorship of the Colonels when fear and secretiveness prevailed. Our parents, our grandparents and all adults in general never spoke honestly. They were trying to protect us of course, but at the time I could not understand why they would avoid answering our questions. I understood later. A Civil War is a trauma of the collective and for those who survived it to get through it they need to forget. Or at least try to forget it. The hard life in the mountainous villages and especially in my village, which was a village of refugees from Ponto, was a given.  They were all poor. They all had the same fate. The Civil War however established deep hate between the people who, up until that point, had lived together peacefully. Fellow villagers, neighbours and even members of the same family, became the worst of enemies,” Elisabeth tells us and continues: “The “dark” period of the Civil War refers to the hate and the death that entailed. That being said it would be good to shine a light on the reasons for it so that it is not repeated. Recall Yugoslavia after 1991.Were they expecting a Civil War forty-five years after the end of the Second World War? Could they have predicted it? In our neighbourhood war was being waged…”

After the Civil War.  “All those who lost children in the Civil War never forgot. Neither will their brothers and sisters ever forget. They will live with the trauma. They didn’t start over again, they continued to live with the pain of loss. Those who had wives and husbands in exile, lived without their support. Without their beloved. For all those who had missing people it was even worse. They found themselves in limbo which reminds us of the situation between Odysseus and Penelope. In addition, no one knew when the period of exile would be over. Once I asked an aunt of mine, whose father had died in exile, why she hadn’t gone to study in Moscow as he had persistently asked her to. She replied that they didn’t know when they would return. They were waiting. Living in hope. They believed that things would change soon and that they would return to Greece.”

Elisabeth’s short stories feel like narratives to the reader although the endings of her stories which are left “open” give the reader the opportunity to wonder and to think of his or her own ending to the narrative.  “I am glad you think I was told the stories because that means they seem true. As far as the endings are concerned, that is typical of short stories. They have to be short, have a central hero and someone or something that provides contrast. There should be a change and a surprise or twist in the plot at the end. And usually all that in one to ten pages. They require active participation for the reader to fill in any gaps which may exist. “And what happened after?” the readers ask me. Especially when it is an open-ended story. That is the difficulty with short stories. They are not like novels where the author has the ease to develop his or her story to a greater extent.” 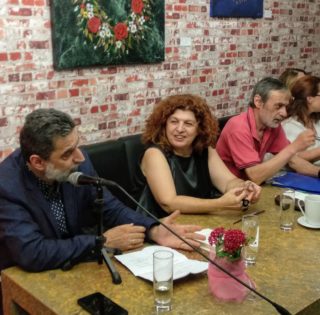 A photo from the presentation of Elisabeth Grigoriadou’s book, “The Other Languages.”

The Other Languages” evokes strong emotions. Some of the stories that Elisabeth heard, inspired her to write a short story, as she herself says. Others found their way into stories which had nothing to do with the village, and others still were so difficult to swallow that she consigned them to oblivion.

Ending the conversation with Elisabeth we briefly visited the subject of today’s emigration of our young people. A phenomenon at large at the moment. This is how she characterizes it, “It seems there is now an exodus of graduates whereas in the sixties and seventies it was young people who were not highly educated who were leaving. They typically came from the poorer regions of the country. One of my nieces who studied here in Greece, went on to specialize in Germany and now lives and works there as a Psychiatrist, she told me, “Write about us too!”  I think that this generation of thirty-year-olds, the best and most educated generation that our country has ever had, will themselves write in the future about what they are experiencing today.”

“The Other Languages,” 2019, Iolkos Publishing House.

Zuhal in front of the mirror
The price of migration