“In a pound of coffee, I want 40 to 50 grams Cardamom and 15 grams Mastic.” This is the pot of Syrian coffee according to the preferences of Abuňour. Every week, he was taking a taxi from his home, in Al Ashrafiyeh area to Aleppo, to get to Menshia area and Ben Aldiafe coffee store, to buy his favorite coffee just as he wanted the dose. He never took his car, because he could not easily find parking. He was taking a taxi because he was combining the coffee, with a walk in the market. Meeting with friends and clients. Ben Aldiafe was famed for his coffee throughout Aleppo. And Abunour, he was one of the best customers. Specialist even in his coffee.

Ultimately, some habits cannot be changed even from a war. Their neighborhood, Al Ashrafiyeh has entered from the beginning to the civil war that continues to tear the Syria apart. It was taken over by the free army. Months later, a relative of them, sent them a video from their home. It had not been bombed. But there was nothing left in it. There wasn’t even the door frames. Only the diary nailed to the room of his older daughter, Amina, had remained on the wall, spotting the year that the family was forced to leave. They were moved to #Afrin. Kurdish region, from which both parents of the family where. The habit of coffee remained the same. Abunour was a regular customer at Memuzin. The best shop of its kind in the area. At Rojo’s street in Afrin.

The coffee shop, took its name from the heroes of the Kurdish version of “Romeo and Juliet”. Mem and Zin. Their story, was real and passed orally from generation to generation among the Kurds. Their tombs are located in Cizre. A city, located in Turkey, in the Kurdish region on the Turkish border between #Syria and Iraq. On the side of their graves, is buried, Beko. The man that lead Mem to death, because he also loved Zin. Mem, before he died, asked his best friend to overthrow his death by killing Beko and bury him on the side of his and Zins grave, to see them eternally together. The writer Ahmad Khani, wrote in 1692 the story of Mem and Zin, who, according to the legend, have become stars in the sky.

Abuňour, likes good coffee. From his journeys in Greece, he had bought a table-top machine and when he was coming to Greece for jobs, he was always taking with him large quantities of Nes Coffee. The machine for Nes Coffee, also stayed back at Aleppo along with most of the families belongings. If the soldiers of the free army succeeded in making Nes Coffee or not, with that machine, no one ever learned it. But when the left, they also took the Nes Coffee with them. 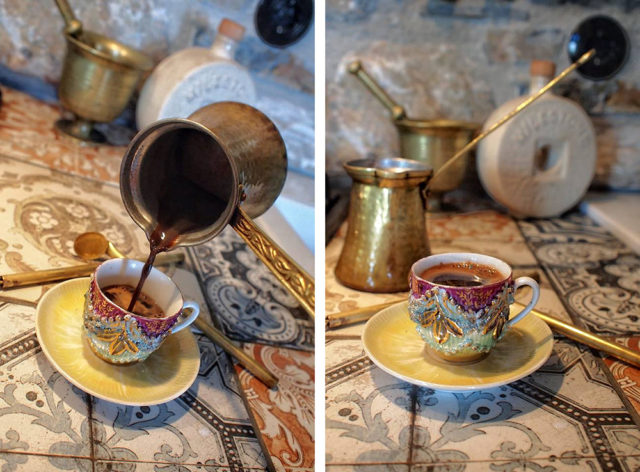 From Afrin, to Constantinoupolis. And there Abuňour found the best coffee shop. The family continues for Greece. They went to Lesbos in February 2016. They have been here for a year and a half. So I met Syrian coffee. Abunour, was always finding a way, with friends and acquaintances, to send sachets of Syrian coffee stored in airtight sachets in Thessaloniki. The family was sending his favorite Nes Coffee, the same way. And a machine for frappe, from the small ones. Not the table. The Khalil family is leaving for Sweden. Leaving me two big sachets with Syrian coffee. I hope the next Syrian coffee, I will drink it at some point with them in Aleppo. At their home, in Al Ashrafiyeh. Purchased by Ben Aldiafe, by analogy. One pound of coffee, 40 to 50 grams of Cardamom and 15 grams of Mastic .

Green Santa Claus
The Other Languages” and Elisabeth H. Grigoriadou