In the “Endless Azure” of a Greek Soprano

Greece has been a proud country for many and various reasons throughout the ages. Greece produces important people, scientists and artists. Greek-Cypriot Katerina Mina, whose father was born in Xanthi and mother in Larnaka, is a strong example of “the good results” that Greek passion, magnanimity, perseverance and creativity can produce. Katerina Mina is a soprano whose remarkable renditions and appearances have made both Greece and Cyprus well known all over the world. (See her extensive curriculum vitae).

She explains on Humanstories.gr: ‘’ With the title ‘’the Endless Azure’’ my immediate plans are to publish my collection of poems. In fact, such a title represents my life completely. This is because there is no end in my life… My career will not finish soon and together with the deep blue color of our seas something exceptional in my voice is brought out…’’ 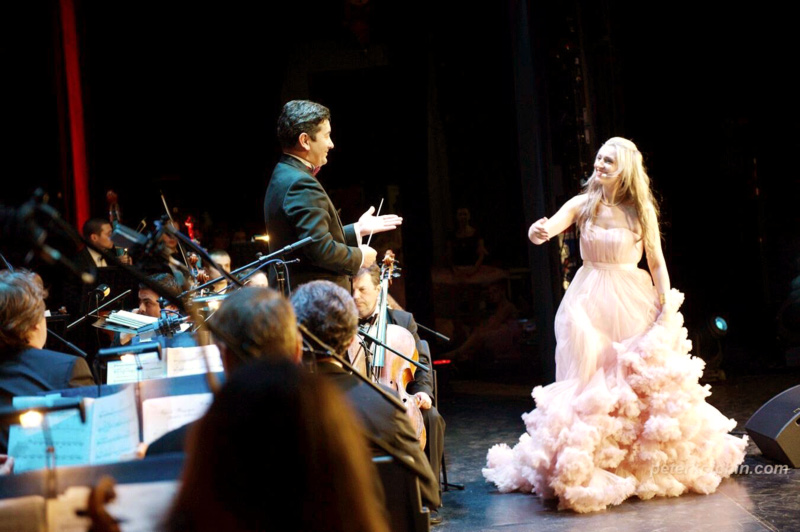 In a recent appearance by Katerina in Moscow. Production by IPCES. Picture: Peter Kolchin

I   introduce to you a Greek woman who stands for Greek ideals all over the world.

“It is strange for a child of four. It is as if I was born with this talent… At the age of four I had asked my mom if I could start ballet classes and piano classes two years later. When my teachers asked me what I wanted to become, I was very clear at the age of seven: ‘Musician…I am going to work in the field of classical music.’ I used to say that and finally all roads led to my greatest love in life. I never thought of becoming anything else. My only complaint is that my talents have not been recognized enough in Greece. My father comes from Xanthi. His parents came from the frontier city in 1922 during the destruction of Asia Minor. Sine 1968 he has been living in Cyprus where I was born and raised. I left for London twenty-two years ago. Perhaps this is why I have not been recognized in Greece to the extent that I deserve. For example, I have sung at theaters such as Meyaro Mousikis in Athens and Salonika, Theoharaki Institute, the Theater Lofos Kilkis but I have never sung at the Opera House in Athens,” says Katerina Mina complainingly.

On Monday, July 27 she departs for Mexico in order to give two major performances with the symphonic orchestra. Afterwards, she is giving performances in Los Angeles, New York, and Oklahoma for one month. Last month she was at the Museum of Art in Oklahoma, and she did well because she received great reviews. While there she met her manager, Jack Price, who helped open doors for her in the United States. What, however, is her dream? She explains: “I want to share my voice with as many people as possible. If it is possible, I would like to share my voice with all the people in the world. I would also like to sing at theaters, such as the Metropolitan Opera House in New York, the Royal Opera House in London and the Opera House in Vienna, and the La Skala in Milan.”

With her voice and rendition, which consist of a combination of classical music, jazz and artistic Greek music, her appearances on YouTube can relax you and take you to other eras.

Katerina, did you begin your career overseas? “ “Was everything easy for you?” we asked and the answers were found in unexpected areas, since she herself never wanted to use them…”My God, everything was very difficult for me. After I had finished the Guildhall School of Music and Drama, where I had studied for five years, I decided to take part in the world singing competition in Spain. I did not take part to win prizes or money; I just wanted the experience. In the end, I won first prize, which was awarded to by Hose Carreras since the competition was under his auspices.

“No sooner had I enjoyed my prize and thought about where to spend the money than I learned I had cancer. Imagine, if you will. In 1999 I had a ticket to Andorra for the Monserra Kampayie competition when I learned about my cancer. Then I bought a ticket to Cyprus where I started chemotherapy. An entire year was lost, and when I returned to London in 2000, I was a mess psychologically. It took me about four years to get back on my feet and start working well again. Moreover, from 2005 to 2006 many people were sarcastic while looking at the five-year gap in my curriculum vitae, instead of politely asking the reason for the gap. It took time for me to build my confidence and make progress with my voice. People in my profession do not do favors because they are not “generous.” They try to find a reason to reject you. Nobody, however, has gotten in my way. When there is rejection, I become more determined. It is as if there is a monster inside me that awakens my instincts that lead to the next job.” 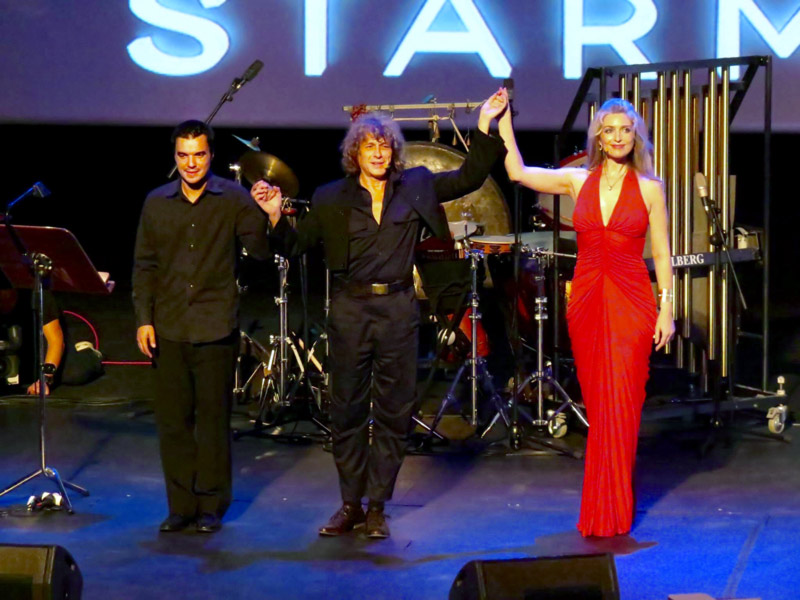 Working with Rick Walkman and the “Bravo” from Steven Hawking

Katerina Mina has sung in front of important people, such as scientist Steven Hawking and Rick Walkman, famous rock star of the “Yes” era. She has sung in theaters packed with hundreds of people who have loved her unique voice. At the end of our conversation she refers to a “revelation” of the modern era which opens professional doors in a way different from the traditional way. 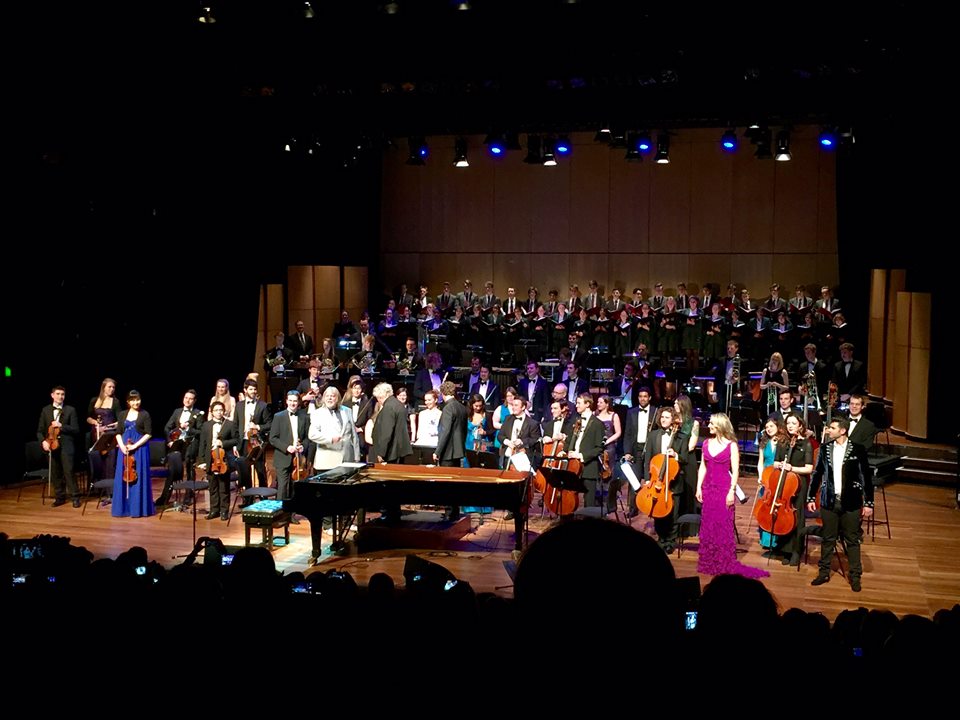 “Whatever I have done to date, I have done on my own. Only recently I have had help from my manager who agreed to Oklahoma. Both of us expand my professional horizons. Right now I am busy at various levels. Singers who need help approach me. I am on social media two or three hours daily. This is highly important, since most of my jobs come from this, strange as it may seem. Great conductors see my artistic works on my Internet and invite me to work with them. What is more, many listen to me sing at theaters and events and we work together soon afterwards. This is what happened to Rick Walkman, rock star of the “Yes” era. He was backstage at the Theater Tenerifis during the closing ceremony Starmus or the International Festival of Astronomy, where speeches by Steven Hawking and Alex Leonof were given. Rick Walkman heard me singing the music of Alexandros Hahali and surprisingly we were both on stage at Queen Elizabeth Hall after a few months. Yes, I sang with the rock legend and received great newspaper reviews from experts.. I sang “Help’’ from the Beatles and ‘’The Morning Has Broken” by Cat Stevens in my opera voice.’’ 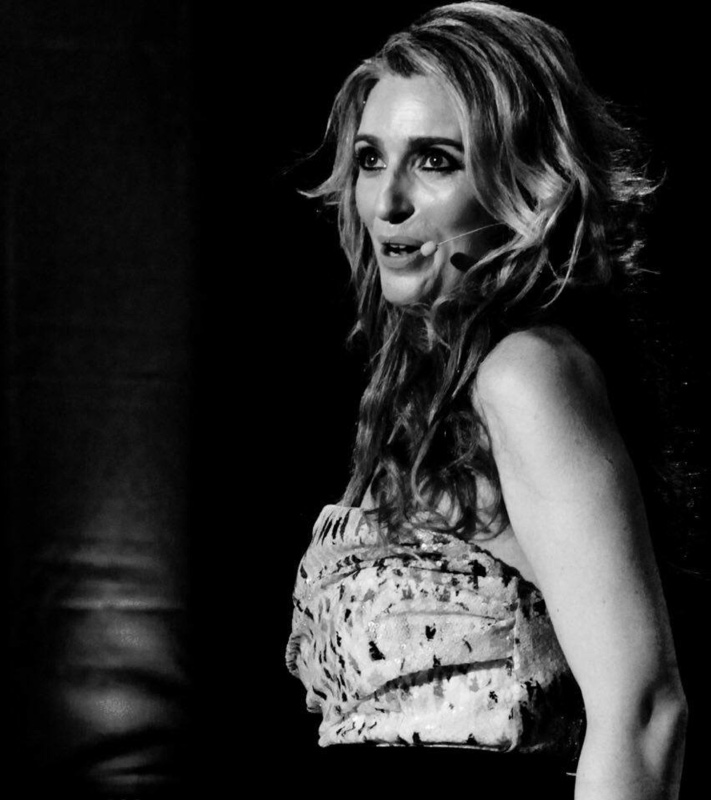 Proud as a Greek Woman and Worried as an Australian
It’s all Greek to Me… Original Qualitative Cuisine in central London!