Drops of “CHRISOMELO” trickling out of his lips as he talks about the Greek land!

Paulo Coelho has written at his novel “The Alchemist”: “Somebody asked him: “How could I predict the future?”, and Coelho replied: “Through the signs of the present. The secret is in the present… If you have an eye for the present, then you are going to have a better future”.  John Tampares is one of those who live for today, who exploits the opportunities and doesn’t fear of the disappointments. He has faith and he envisions because as he declares; “the future belongs to those who believe in their dreams”.

John had been working since 2009 in the Police of the Municipality of Athens. In the spring of 2010, himself and his wife had visited randomly the apiary of a friend in Calamata to have a look at the society of bees. ‘When he opened up the first beehive, we saw what was going on in this brave world. We were stuck at this, literally!” John says, and he adds; “At once, from that moment we decided to follow every course which “was running” and we bought the first beehives! Since then and after the Police services were discontinued in 2013, we had had the apiary as a hobby. We have done many mistakes, we have been disappointed many times, but our “meraki” (in Greek language “meraki” means to give the best of yourself in your activity) and our love for the bees and for the Greek nature which gives to us positive power to keep constant the good work”.

It is a fact that John made the difficult choice to discontinue his engagement with the public domain despite the alternative of accepting a shift from the Police services to another domain of the public services of the state. John had resigned and then in 2014 both himself and his wife took the important decision to invest all their money for the supply of a brand which could be demanded from the markets. That’s the way which CHRISΟMELO was founded.

The exceptional product and the vision of two Greeks.

John Tampares comes both from Polygyros of Halkidiki and from Calamata. Even if he never had the experience of apiaries, although he has the natural talent from origins of Halkidiki, and from this point of view he told to the “HumanStories”: “This is the place where the greatest beekeepers of the whole country have been! The society of bees is brave. It is the society with the best operation in nature. Our society should get lessons from the society of the bees about the operation, the productivity, the unity, and the creativity”.

Working with the apiaries he loves…

Beekeeping is a continuing observation of the apiary. Every day is a unique other day. There is no routine… “Usually, the most repeated operations are the revues we do checking the situation in which the bees are, and if everything is in a process of development. But, always, there is something new for us to observe. The learning about the life of bees is endless! The beekeeping is observation of the beehives, unscripted, knowledge, and patience with the stings of the bees …”

But how do we recognize the good quality of the honey? “The Greek honey is the best in the world. This is my personal opinion! Our country, Greece, has so much space with vegetation and so favorable climate conditions that a bee is able to drink big amount of nectar and honeydews! I think that all the kinds of Greek honey have an excellent quality. But the imported honey is debatable about the quality and the origins it has.

The Chrisomelo has six kind of honey which are the oak honey, the asfaka honey (Phlomis Fruticosa), the heather (or sousoura) honey, the orange honey, the flower honey and the thyme honey. It is oriented to the markets outside the Greek boarders. “We’ve already export our honey to 14 countries (Europe, Asia, America) and the most important is that we gain the trust of the consumers. As a result we engage powerful co-operations and the horizons open for these markets and for other Greek products. We want to advertise our country through the array of our products. We want to share our drops of Chrisomelo all over the world! I wish all the Greek producers to take a chance like this one…

“CHRISOMELO”, the flagship of each company…

The flagship of “Chrisomelo” is the oak honey which has fine perfume and taste, also is elevated as the top antioxidant honey between 48 samples according to a recent survey of Aristotle University of Thessaloniki. After the oak honey follows the heather (or sousoura) honey and the last one has received very good criticisms, and follows the honey of asfaka (Phlomis Fruticosa), and the thyme honey mixed with blueberry. “The global niche market of honey is very interesting. Cases studies are demanded for each one of the markets, also a separate business plan for each one, and stability. A trade destination which has great prospects and I believe that we are very lucky to export our honeys is the Japanese market.”

At present, Chrisomelo has two codes with mixed products; the first one is the thyme honey with blueberry, which leaves a sweet-and-sour flavor at your mouth and this could be mixed with yogurt meal or to add this on fresh gourmet salads, on sweets or on a super breakfast. The second code is the flower honey having white almond, “We call this “touristic” code, because its big supply at touristic places as the Greek islands and hotels are. Also, the inspirations of the flavors are made with the constant contribution of the food science and nutrition department of our production”.

The mixed flavors give to the final production the criterion of  “value for money” . We target to the costumer’s first positive impressions of the products. We want to help him understand the usage of the products, and, finally, customers to demand our products.

John’s future plans are many. He wishes to work for other products. He enjoys the visioning for the future. He feels the total happiness and that he is very lucky who works in the nature. 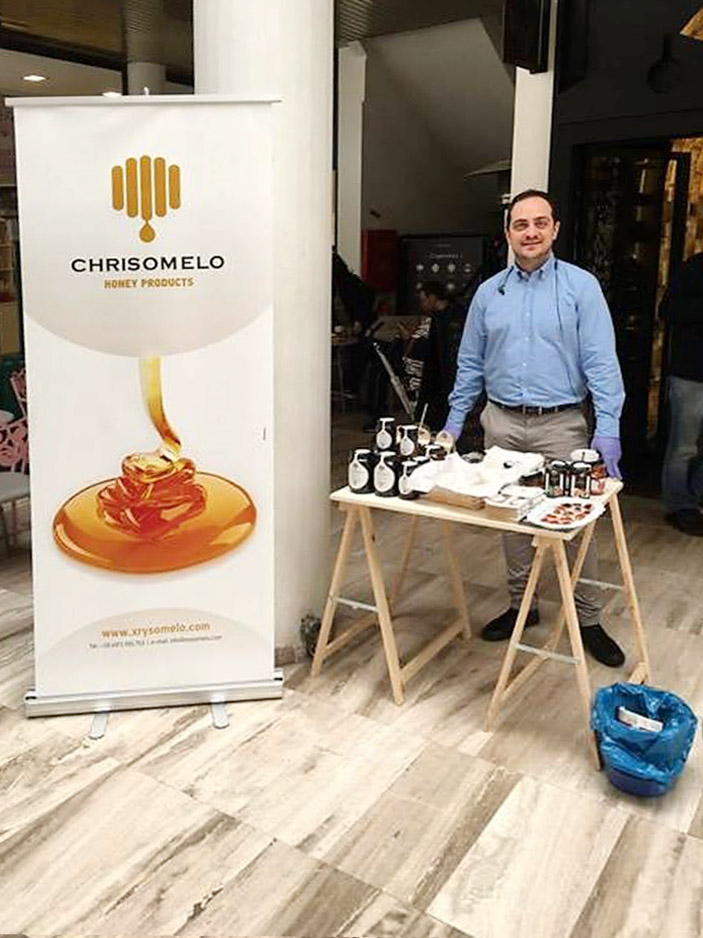 Mr Tampares at one of the presentations of his excellent products.

“Happiness is to live as you wish and not to be repressed. I love each of my every day to be creative and this makes me feel that I am completed. I have strong feelings about my job, otherwise the future belongs to those who believe in their dreams… We need to believe ourselves, our plans, visions, and have feelings of love about our objective”.

John is also director in the advisory board of Aloe Blend company. “Three years ago at Platy of Messinia my father-in-law in co-operation with the uncle of my wife started up a biological agriculture of Aloe Vera. This summer brings out the first big production, and on this results we have formed a group and we have established the Aloe Blend, a new company under my guidance. The philosophy of the new business venture is to blend the Aloe Vera with other fruits and elements and produce the final product which will have very fine quality and will be unique for the markets. The first code is already streaming in the markets, and it is in a liquid form with ingredients the biological Aloe Vera, lemon, agave (American) and spearmint! This doesn’t consist sugar or preservatives, or pigments. This is a formulation which gives to the product an excellent quality of nutrition. There will be other codes having Aloe Vera, Aloe and orange or marmalades made of Aloe Vera. Also, we are going to create a department of cosmetics in the production.

We have already exported the product at Great Britain, and it is ready for sale into the Greek markets, too. There is always space for an innovative and qualitative product…

A CrazyCello with Humour and Originality
When holding a map in your hands you hold the message!