Startup at methodical, innovative and effective ideas along with the “maître” of the genre

More and more are the young people (or eldest) who think about starting up their own business that will be based in Greece or in another country (mainly European countries). The “humanstories” are having as guest-star Dimitris Tsingos who is one of the innovators of the “start-up” ecosystem in Greece. When Mr Tsingos at the age of 21 along with four of his classmates started up the Virtual Trip company which is about web development, he was studying Computer Science at the University of Crete, and after that the master in Economics at the University of Athens. The Virtual Trip was the first start-up business in Greece. It is true that in Greece the “start-up” system was publicly known since 2012 and after that when the European funding of development was in operation for the state and the businessmen.

Dimitris Tsingos was born in Aspropyrgos (an industrial area on the west of Athens), and he was the president of the European Confederation of Young Entrepreneurs “Yes for Europe”, and the inventor of the Hellenic Startup Association. “The Human Story of mine is interesting for those in Greece who are resisting taboos, obstacles and distortions of our society which is not like other European countries in this domain, or even like the USA which are the birthplace of the startups worldwide.

“My story has its beginning back to 2000 from the University of Crete. While I was studying Computer Science, myself and four other of my colleagues invented the first firm; the Virtual Trip which was a start-up business. This was the first start-up business all over the country that had ever invented by students. Just before the American stock market bubble, we had begun our projects and funding in cooperation with the Greek state, but we could have fall down if we hadn’t decided to invest in products related to markets out of the borders. At that time, we cooperated with our employees and we became collaborators with them in other companies where they had create products, and we supported them with all our infrastructures and our background knowledge to apply their projects. This is our basic context; specific quota to be quite low according to the statistics of success.

“ We have sold one of our companies which had been very successful, and related to the sector of “Mobile Games”, to an Austrian company (2015) from the same sector. We are having a company at the e-learning field which is very successful and three more companies which have made “pivots” (changes to the products, changes to their trade names etc) and they are in a process of bringing profits” Dimitris Tsingos highlighted, and talked about the new role of himself “on the other side”; as an invenstor of start-up firms.

“When we had sold the one of our companies we did some investments; we became invenstors in start-up firms. We ‘ve helped others to create things and to make their dreams come true, their idea of  business to come true. I belong to the Angels Invenstors (“StartTech Ventures”) and we offer from 20.000 to 50.000 euro. We try to find others to invest with us as we support the StartUps in other ways. We give our services of developments, designers e.t.c. Each company we support is going to take both money and a package of services as long as it is necessary aiming to focus on the product of their business.” 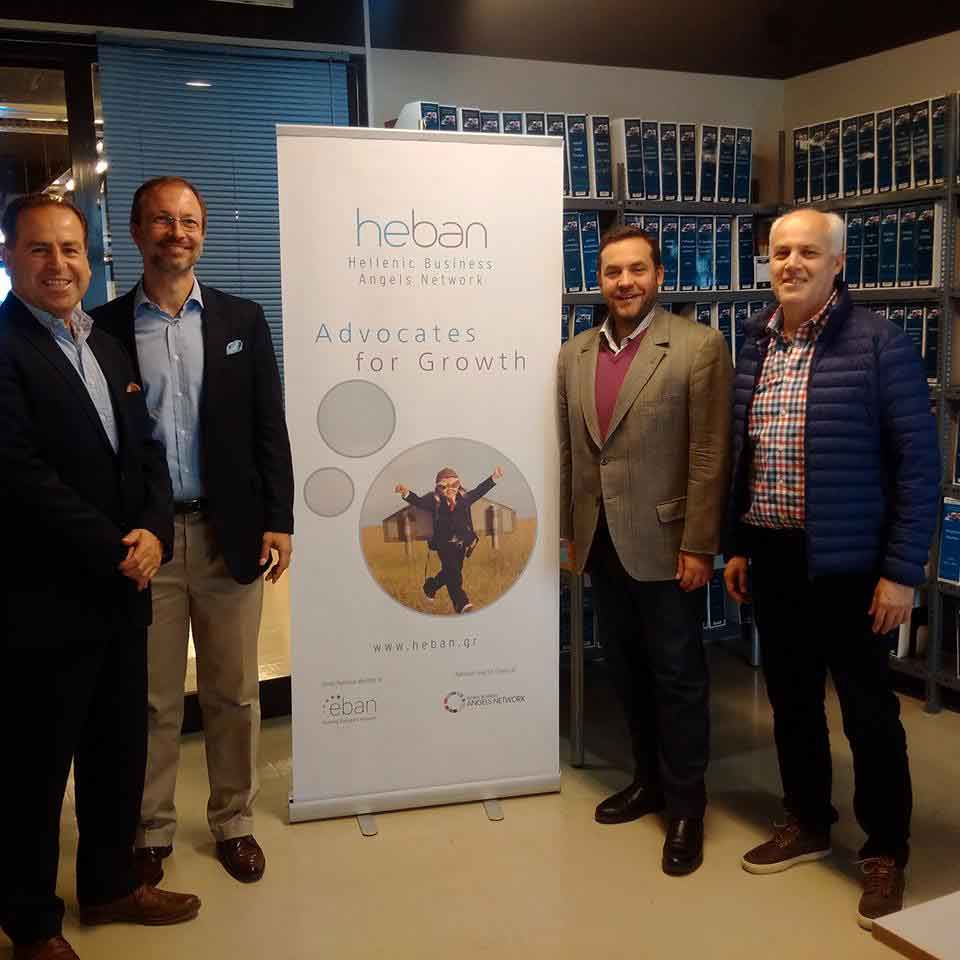 Now as an “Angel Invenstor” he is capable to talk about all that happen in the field of StartUps in Greece since 2012.

THE “WRONG” SENSE OF A START-UP BUSINESS

And the point is what is a StartUp company? Dimitris Tsingos as he is the master of this field, explains to us analytically: “I had been the pioneer of defining those companies which are start-up in 2011 while I was the president of the Association of startups. Finally, “start-up” is each business which has the three follow characteristics:

1) When it is a new company. New is the company which has 3 to 7 years in operation. New is not a reference to the idea exclusively.

2) When it brings a new kind of innovation into the market, not only in a technological manner but to make something different in general. This one which could give the solution of a problem in another way.

3) When (the firm) focuses to grow. This means that the firm is organized to grow from the very beginning, and wants the extroversion.

“But I insist that the idea has no meaning except if somebody has invented the medicine of cancer. There is nothing unique as an idea. I am presenting you an example; I have been to India where 1,5 billions of people live. The ideas which I thought that were unique, I found them applied. The implementation of an idea is the value; that is the matter.

Which are the elements that contribute a successful company based on extroversion. “The most important point is a team having complementary abilities. No one could do everything by himself. At the field of software I suggest to new businessmen 2 or 3 co-founders and to include the business skills and the technical skills into this team. Also the team has to be totally engaged to its target and very determinded for it. Magic Johnson has made the best statement apropos the rebounds; not the tallest or the strongest takes the rebounds but the one who wants most. That’s what happens with a start-up too; neither the most rich wins neither the smartest, but those who are the most decided. The one who wants to do something is going to it even if the whole word comes up-down. When somebody will go determined to take the funding out to the world, he will take the funding. The first thing that matters for an investor is the degree that somebody is decided, and if there is the spirit of collaboration and leadership.”

Dimitris Tsingos travels a lot all over the word, learns “new ways of enterpreneurship” and gives opportunities to more people who are fulfill the essentials of a start-up business.

THE LACK OF COLLABORATING CULTURE IN GREECE

Finally, being a businessman is a natural characteristic or not? Dimitris Tsingos explains to us: “There is no answer at this point. There have been people who are open and communicative more than others, and effective to make things happen. But such skills could be cultivated. My father was an accountant and I had listened many stories about businessmen. Furthermore, I have studied at the University of Crete. This has been a contemporary, fresh University with professors from the USA who used to talk about such stories. Afterwards, I have complete MA studies about Business Management, I have had very interactive with my colleagues as a trade unionist at student clubs. I had dealed with business models and I had adopted presentation skills. There is nothing magical, everything has an explanation.”

But which is the element that could reform a company to a successful model or lead to a failed model: “The most important of all is the culture of collaboration. This is the most important because we as people do not have this mentality. The route of business is not a reclusive space. It is a fact that there is a detrimental usage of SA; in Greek case this is an “atomic” operation where the boss has the final decision or the job is not going to be completed. This is not “co-operation”, after all.”

“At present, we are over 15 collaborators who are having the same seat of power in taking decisions, but we are separated in each of our companies, per 2 – 3 owners, and at the end of each year a final analytical discussion is taking place. It is important to realize that investor’s attribute is something different from the manager’s attribute or the employee’s. Many people do forget this point and because of this turns on all the misunderstandings.

“The culture of collaborating teaches that none is irreplaceable and that everybody is capable to do everything. You hunt for others who have skills and they are better than you are. Smart businessmen use to hire people who are better than themselves so to go further and to develop their company. The Greek businessman, unfortunately, hires people worse than himself so to control them.

Dimitris Tsingos believes very much in knowledge and in the power of human resources and has his orientation to extraversion.

Always in Greece a failure on business was a shame, a taboo, in contrast with the economies of developed countries (for example the USA) where the failure is an order. Dimitris Tsingos says: “Many times people who take risks and win are gods for us and if this won’t happen, we criticize them. This includes a grave injustice. That’s why I believe that we have to learn how to evaluate the method of an attempt.

“The failure doesn’t mean something when it is examined as an abstracted. I have read a very nice article about Galis that has been published in “Hall of Fame” where the methodical and taught job had been presented. It was not the classical heroic attempt. He has been so professional, so methodical…

“That’s why we have to evaluate the course of an attempt starting from the point of the way that this has been build up and not from the result. The result includes the factor of luck. This factor either you face it as fatalism or not is something to develop, to make it better. If you are methodical, hard worker, if you are working “by the book” using scientifical approaches, all the possibilities are for you. I appreciate those who make thoughtful and correct choices. In business the point is to do the right thing, and if you do it all the possibilities are for you. Certainly, there will be the unlucky one who will do the right thing but he will fail. I would recognize this failure in case the businessman would have done a serious job and would have learned a lot.

“Since 2000 when I installed my first firm the mainstream has been “going and thinking over”. In this way progress is not going to be achieved. We have been always having exceptions, but the problem is the average that stucks unfortunately on the bottom levels.

“How much money do the Greek families spend in tutorials for pupil’s preparations and how much money go to business investments. The contrast is very big because the money that go for tutorials are 1000 more, than those for the Greek enterprises.