“Welcome to our home,” at the Echinousa residences

Kimolos. The island of chalk, which the ancients Greeks were using as a soap for cleaning clothes and shaving their beard. Also known as Echinousa. Sea urchins. The island of Kimolos was been visited by pirates, that were feared even by the Turks. At 1638, Kimolos was occupied and burned down by pirates, so the inhabitants fled to Sifnos. Only 200 souls were left on the island then. But it seems that the Kimolians, unable to deal by themselves each time with the pirates, were forced to reconcile with them and even provide them with services. This is due to their great naval experience which was appreciated in those years by both the French and the Sultan, whom they considered to be a great patron while they hastened to pay the tribute tax.

From the island of Kimolos, which stands out for its simplicity, were also the parents of Domniki Ventouri. Domniki, when she was a child, wasn’t visiting the island very often. Her childhood summers on the island were just few. The reason for that, was that the transition from Piraeus to the island at these years was very difficult. However, she returned to it and created summer memories with her own family. At 2006 she opened a tavern on the island, and at 2014 the “Echinousa residences”. Domniki and her family invested in the island. 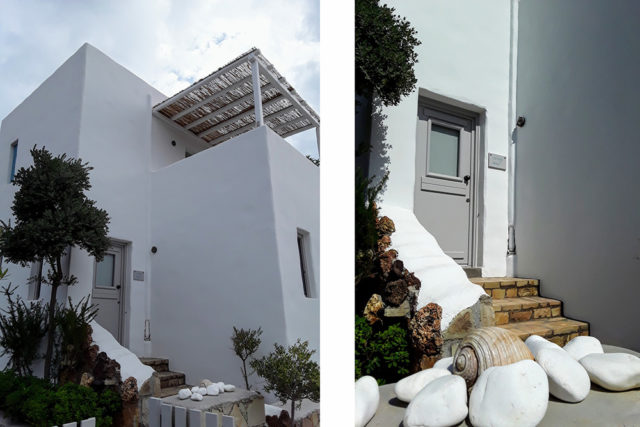 “I was born in Piraeus. Both of my parents, however, were born in Kimolos. In their teens, they left from the island and settled in Piraeus. I had just a few of my childhood summers in Kimolos. I remember that it was difficult to get to the island. My contact with the island actually, began in 1994. After the birth of my first daughter. Since then, we have been staying on the island every summer for three months. In the summer of 2006, I opened a tavern in a privately owned area on the beach of the harbor. At that time, I was permanently tied up with Kimolos. Near the beach, I had a piece of land and sometime during the crisis, we decided with my husband to build the Echinousa Residences. We saw that tourism is an outlet and that our children could continue in the future. The project was completed in 2014. And that same summer we welcomed our first customers”.

Approaching the place, what someone sees, is not a common hotel but a cozy neighborhood amidst the gardens that scent the breeze of summer. Domniki and her husband set up a complex of six unique residences in a quiet location 100 meters away from the sea. “Each home has its own personality. On the ground floor, ‘downstairs’ built-in sofas and washbasins outline the island’s unique architecture, while the upper floor ‘upstairs’ features a large built-in bed, bathrooms with typical stone washbasins and large showers”. Domniki is describing us.

The small complex measures five years of operation. It has gained regular visitors who return to their “home” every summer. “During these five years of operating our small hotel, we have been able to make steady customers. With whom we are tied. And every time they come back, they always say the same phrase. “Welcome to our home.” Of course, all these visitors return to the island. Which holds the character of ancient Greece. “ 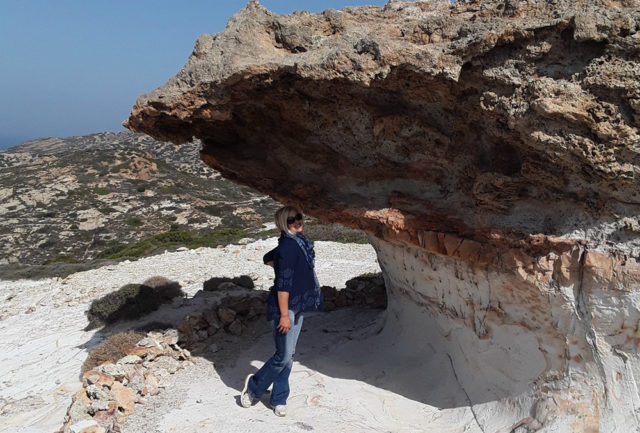 Domniki in her beloved Kimolos

Domniki stays on the island from late March until mid-November. The rest of the month she returns to the capital of Greece due to obligations. But she dreams, as she is telling us, the time that she is going to become a permanent resident of Kimolos. “My kids are studying in Athens so I have to come back… Currently, the island has about 400 inhabitants. And after seven difficult months of work, people relax and enjoy their daily lives. “While still on Kimolos, Domniki enjoys the “countryside of the island”. “There is a very good network of old trails on the island, which thanks to the generous effort of a volunteer team on the island, keep the network clean. And it gives us the opportunity to get to know a less touristy side of Kimolos. “

We asked Domniki, if Kimolos could have tourism all year long. Her answer was no. “No.  For me Kimolos is not a good winter destination. The reasons are many. The most important is the transportation”.

Wander in the neighborhood of Echinousa:http://www.echinousa-kimolos.com/