“I became a wine archaeologist in Kazaviti of Thassos”

The sun is slowly setting on the horizon, on the island of Thasos, and Alex and Audrey, sitting on the balcony of the tavern “Giannis” in Kazaviti, gaze at the sunset and discuss what can accompany the wines that have opened in front of them. Alexander Heer is a German winemaker and Audrey is a French chef and diving instructor at the CAT diving school in Prinos. The bottles with the wines in front of them are the wines made by Alexander, in the vineyard he has created in Kazaviti. They are all special wines, from local Greek grape varieties and among them, Aquanautic wine stands out. Before we tell you the story behind Aquanautic, there is the story of Alex, which is very interesting. “I like the wines that age in the basement and tell the story of the winemaker who made it. Woman or man “he answers as to which wines he likes. Alex’s wines tell his story, but until you try them, let us recommend him.

From Leipzig to Thasos, looking for the virgin

“I was born in Leipzig and was growing up with books of archaeology, botanic, entomology, and geology,” Says Alex, and continues: “I was interested to do a classic manual work to increase my knowledge with deeper studies in theory. I wanted to create something in an artisanal way. My parents are graphics and typo graphists so it was clear to combine basic knowledge with creativity.

I started my apprenticeship as a winemaker in the year 2000 in a classic way of learning winemaking in theory and practice during three years. The goal was to study at the University of Geisenheim as a diplomat engineer of enology and to solve the studies in the year 2008 in time. During those times I rent vineyards in the region of Rheingau and practicing my skills with Pinot Noir and Riesling in a Francophile and burgundy stylistic. Since 2004 I produce organic wines in Germany in small amounts but with the target to work in a sustainable way in coexistence with nature and as a protector of landscape gardening”. 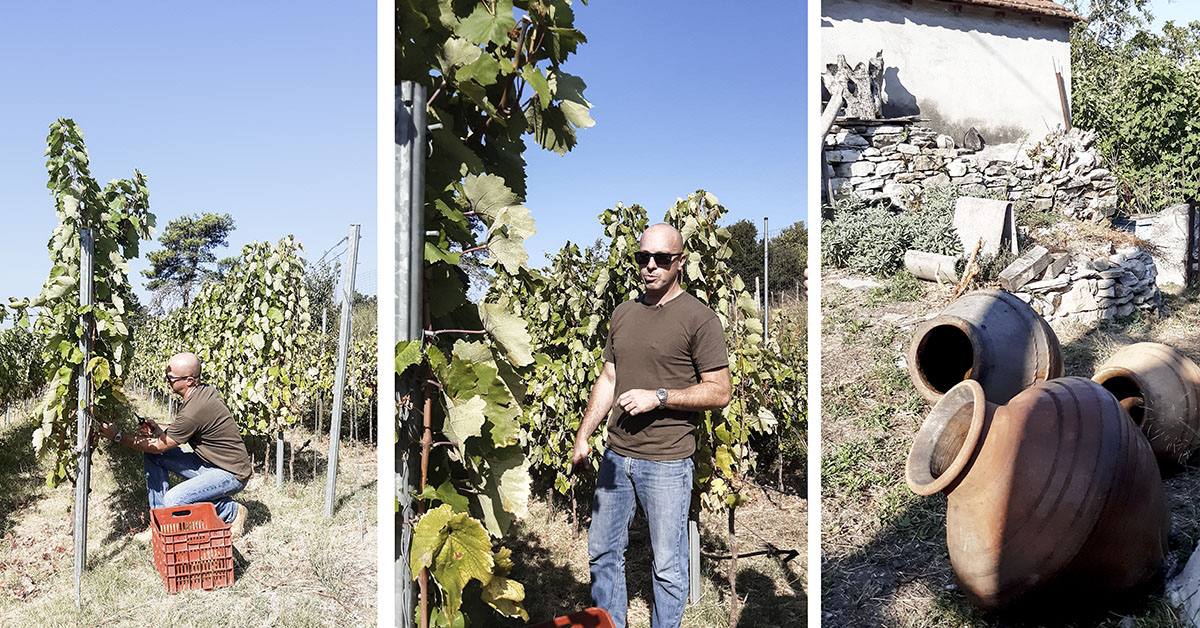 Alex started his career with wine in a classic romantic way, clearly influenced by the work of his typographer parents. The way he approaches winemaking and his enthusiasm are reflected in the final result. Alex’s wines are telling his story and how he arrived at Thasos at some point.  “I have a good friend and spokeswoman for wine and culinary in Munich. She is working for the press and as a consultant for restaurants. She gave me a lead for a contact in Munich. His father started to buy houses on a small island in Greece called Thasos. He wanted to revive an abandoned village called Kazaviti and as a Doctor, in Biology and Ethnology, he discovered some old rootstocks in the valleys. He was searching for a professional winemaker to open the doors and to bring somebody in contact with the natives. As she informed me about that fact I answered to her, Greece is nice and I love the mythology since I was seven years old but my wish is to protect the autochthone vines in the highlands of Portugal if I go one day in a foreign country. She was asking two times in October 2011 and I sent an email to the old German gentleman who fell in love with Kazaviti in the early 1970s. He answered immediately and I was thinking about it for three months. In February I decided to make an expedition by car and trailer with three of my friends and apprentices. We arrived there in March 2012 and I made contracts with two owners of completely abandoned vineyards with a field plant of several vines demolished by goats over half a century. I analyzed the soil and I realized they were never treated with pesticides nor herbicides. A gift. Virgin soil. I decided to stay”.

The house of Wine “Kazaviti”

The village of Kazaviti is located at an altitude of 390 meters and four kilometers away from Prinos. It has a long history in terms of viticulture and wine since it has been inhabited since the 4th century BC and pieces of amphorae have been found in the area, with which they carried the wine. And the name of the village refers to wine. In the house of wine, since Casa in Latin is the house and Vitus means wine. The whole area around the village, on the slopes that embrace it, used to have vineyards. The vines were planted in scales, with stone terraces holding the soil. Impressive and difficult constructions, which have now been abandoned.  “I am very happy here in Kazaviti,” says Alex and continues “I realized that I am just a small part of the time and I am really thankful for that. I arrived well especially on Thasos because I met here people who opened doors for me. The curiosity for me as a foreigner was completely positive and the villagers were always helpful. A lot of Germans and international friends have been visiting me during the last decade and they said that I was in big luck to arrive there so friendly and with such hospitality. In my case, I identify with the ancient vineyards here more than I ever had in Germany, Portugal, Slovenia, or New York State. There are not so many chances in life to have that options. My philosophy is to take chances does no matter how inconvenient they are in the beginning. I became a wine archaeologist and I was able to make my own sciential analyses of a hidden treasure. It was a good decision to move and to generate reputation during difficult times under economic circumstances since the crisis of 2008 starts. As Saxonian, I became a European closer to the Orient although I know the Greeks have a critical opinion how Europe is going today and what it takes to play with. I was thankful to let the political consequences beside. I find my identity on that island”.

Alex’s ancient Greek wine is “baptized” in the sea

One wine that stands out from what Alex vinifies, is Aquanautic. The wine of the sea, which encloses the whole of Thasos. It encloses the slopes and the virgin lands of the island, it encloses the sea that embraces it, it encloses the ancient Greek grape varieties, the history of the island and the tradition on wine, but also the ancient Greek way of winemaking, which Alex discovered during his visits, held at the Archaeological Museum of Limenas. The wine of Thasos, in ancient Greece, was considered one of the best wines along with the one produced by Chios. From the 5th to the 2nd century BC, the wine of Thasos is mentioned as one of the best, which was forbidden to be watered, and in fact, in the 5th century, there was a law according to which anyone who watered the wine of Thasos was fined. A 10th-century agricultural textbook mentions the technique used to make wine in Thasos, where the grapes were first left in the sun for five days and then dipped in sea salt. Finally, they put them in jars until spring. Alex, in the creation of Aquatic, uses the old Greek grape varieties, as well as the seawater and the Amphora.

“After years of research in museums in Greece, I came across various recipes carved in stone or documented in other ways,” says Alex. “These sources were the opportunity for my journey back in time. In order to explore not only the old forgotten grape varieties but also the instructions on how to make wine. Since there are no longer any real teachers of this ancient style, we worked according to good professional practice and current hygiene standards. The story begins at the Museum of the Port of Thasos in 2013, where I found the oldest law on wine on display. I translated it and there are some peculiarities of an old-style revealed. Dry the grapes in advance in the sun and then soak them in saltwater for 20 days and knead them again with fresh grapes. This technique is at least 2,500 years old. Following my research, I came across new sources in the museum of Chios. On this island, they probably went a step further and immersed the grapes for several days at a depth of about 12 meters near the coast. In 2019 I contacted the diving school that exists in Prinos. They were all professional divers, with at least 600 dives a year in the waters around Thasos. I asked them if there was a possibility of spots where I could sink in the grapes, with good water conditions and without the risk of being swept away by the currents. They told me that there are such points, but they told me that before we show them to you, you should be trained in diving in order to be able to inspect the grapes that you will sink on your own. I was a swimmer, but I never thought about diving. I thought about their proposal for a while and finally, I said to them: “let’s do it”. That’s how Aquanautic wine was created”.

Aquanautic is a very special wine. In the first year, Alex kept it at the bottom of the sea, for 6 days. Last summer, he left it at the bottom for 2 days. I dived with them when he and Audrey lowered the crates of grapes to a depth of 12 meters and secured them with anchors. That same night, I tried last year’s Aquanautic at the Tavern in Kazaviti. It had a very nice aroma and nice color. The taste was special and quite salty. While I was tasting, Alex and Audrey continued to exchange views on what food best suits each wine. Without being an expert in wines, I was sure that Aquanautic does not go well with any food. It matches memories from the summer in the Aegean. When I tried it again three months later, in Thessaloniki, I was sure of my point. I do not know if Aquanautic ever manages to gather fanatical fans, but it certainly tells the story of Thasos and the Aegean.

Alex, the German winemaker, who after ten years in Greece, now feels closer to the East, continues to create wines that tell stories, at the wine house in Thasos (Kazaviti). “Make the wine as authentic as possible,” says Alex. Although German, he tries to tell the story of ancient Greek wine in the most authentic way.

The heroine "Woman of Olympus"
No more posts