When holding a map in your hands you hold the message!

In our memories, usually, maps and classrooms are connected… What if we live in a digital world! Classrooms conserve a priceless accessory coming from other  seasons of our lives, the more romantic and less hi-tech; the maps! The using of a map gives orientation to somebody who arrives in a foreign place and he wants to find his point on the map, or to know better his country.

A map is a piece of art. A map could help us to know better the place we live, remembering the past and discovering new locations. This priceless piece of art was Katerina’s Rotsou inspiration when Greece had been the central point of economic crisis. Then Katerina edited the map and created “thegreekbag”, the bag which is a map. The bag, which gives pictures of a map, and insists to be produced in Greece. “And this is that makes her especially greek.” Katerina said to HumanStories.gr . “The mission of the bag is to share a message, to talk about you, your interests, your desires, your concerns and even your fears…”.

Katerina was born and grew up in Germany. At the age of eighteen she came to Greece for studying but never went back to Germany. Since then she lives in Alimos, but the hometown of her family is Messinia, the region with whom she has a very special relationship…

“In my memory summers are related to Messinia. It is a “blessed” land exactly as people use to say.” Katerina said. She has studied Philology of German Language and had worked for many years as a teacher both in the private and in public sector.

“But my big love is art which I used to incorporate in my lessons with every chance I had had, and certainly in my everyday life exists art. In this way I found myself inventing the new world through this medium, the bag – map. I have called it “thegreekbag” and I’ve decided that I’ going to support it to grow. Actually, at first it had been a “tote bag”, then had changed to “shopper bag”, and then a zipper was added and it was named “with a zip”, and in another moment it was a tie for the successful greek businessman and not only for him. After all these accessories like a handkerchief and a stitching was added, and called “thegreektights”. Literally, all Athens in our hands. Given the inventing, I understand that many could be invented.   The map has become a way of thinking for Katerina, an adventure and a quest. “I wanna say my thoughts and all my hypothesis about others, or I want to know what the others think about one matter. I wanna talk about my hometown, to talk about how Greece had been in the past and how Greece is at present, about my hypothesis about my hometown in the future. I wanna remember the past and underline all the new things. The truth is that you can send the message with a map. 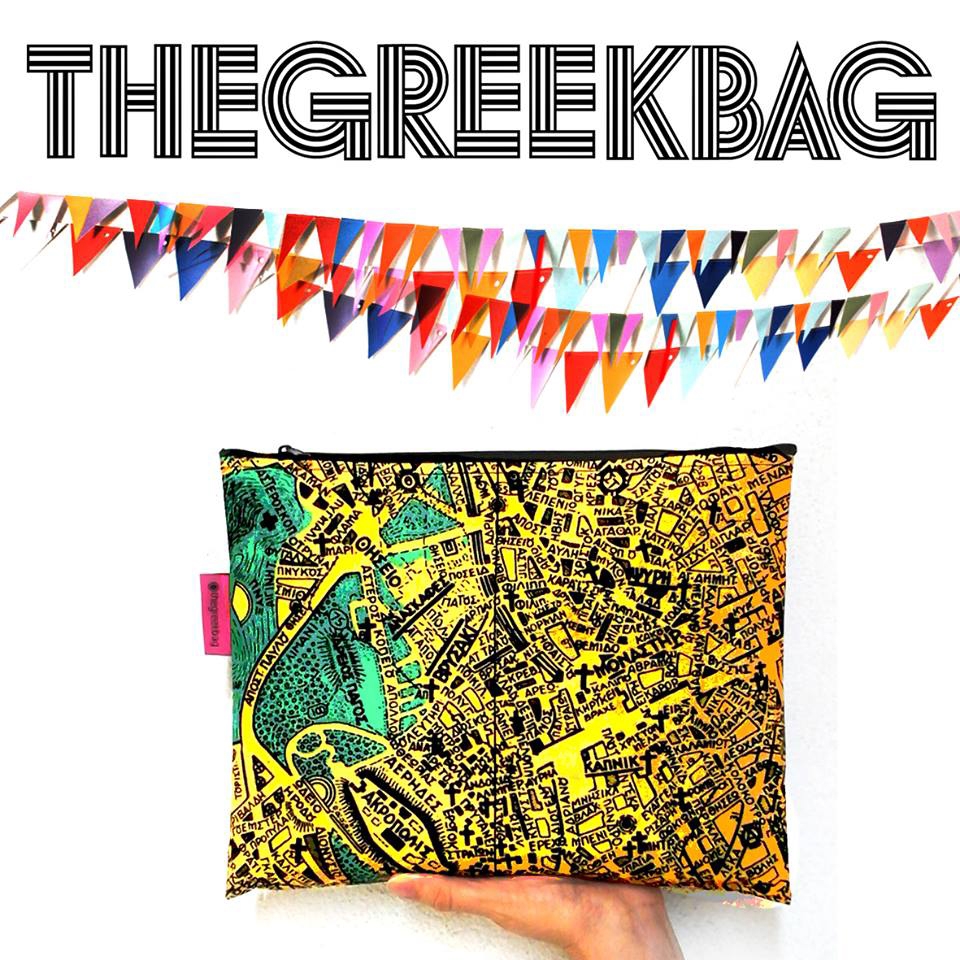 A bag – map that you are having constantly with you!

How did the traveling with a map began? Was it a coincidence? A coincidence consisted of joint facts? Katerina wanted to talk about Greece, about Art, about dreams and opportunities we have to go after… Because the fact that matters the most for Katerina is to deal with our values and our ideas every day…

“I wanted to change my life, at the moment that everything was changing. Maybe that’s why I was motivated. So, I was focused on the map. It had been a coincidence the fact that I decided to work on the map. The most important matter, finally, is to focus, work in depth, and fight for your beliefs. When every attention of people all over the world had been focused on Greece, I was turned to this piece of work. As I was observing it I noticed Greece for one more time and asked her to give me another chance. Thanks to the map I was having a step for my voice, a starting point to talk in my way about the matter we are all troubled. A map is an all at once message and I just agree and I enhance.

My starting point had been the tote bags because they are my favorites and it is something that I use a lot. Except of this, I wanted to exploit the communicative type of the bag. Bag’s mission is to share a message, to talk about you and your choices, your interests, your desires, even your fears” Katerina said and added; “On the other hand the tote bags are the most simple to construct, as my knowledge to sewing have been confined. My first step was a tutorial of sewing on You Tube and my mother’s sewing machine…”. 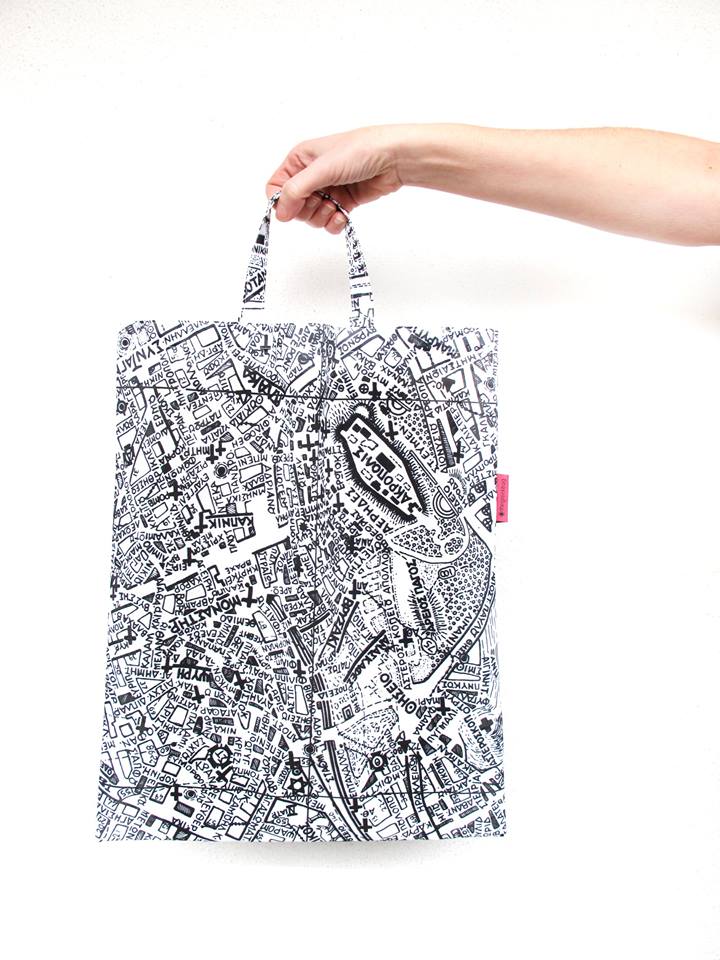 An excellent idea to better know your place…

Katerina chooses the maps with criterions of what touches her taste in paintings and also anything that motivates memories. She is open to what touches, or expresses others, or others to look for a common way of printing of whatever they like but to be friendly to eye or hand.

You can find Katerina’s creations in a few and very beautiful spots in the centre of Athens like in “booktique”, in “Koukoutsi” at Kolonaki, in “Forget me not” and in “Matalou at Home” in Plaka. There is in the bookshop “Sporos” at Kifissia lately, and in summer is going to have its holidays at the greek islands.

Everyone who is far away could find and order from the e-shop…..

Her thoughts about the future are “…to be able to live in dignity in Greece. I think that this includes everything.” 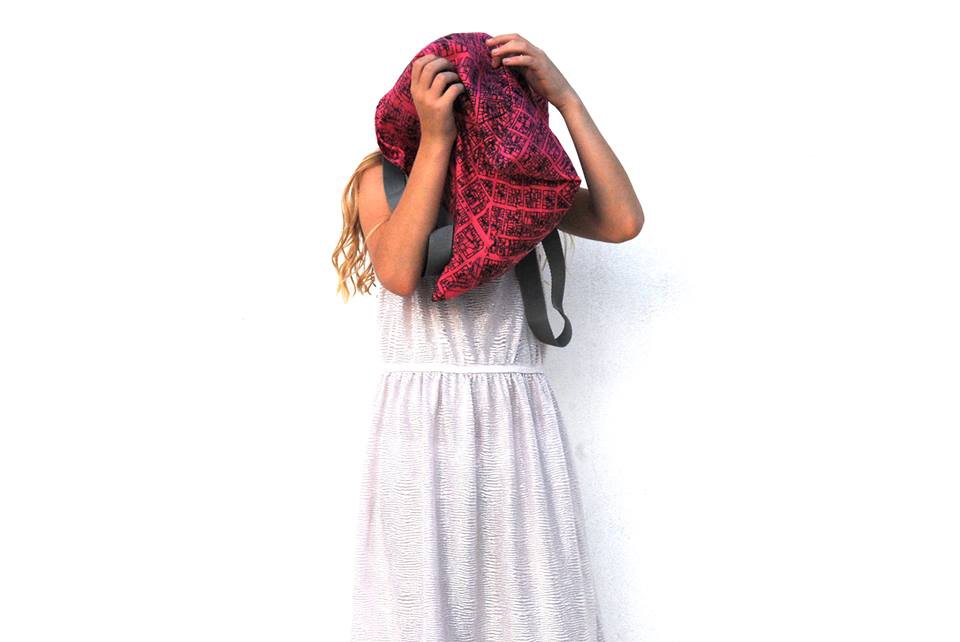 Drops of “CHRISOMELO” trickling out of his lips as he talks about the Greek land!
Vassilis Prasinos and his small paradise at Donoussa