“On The Rocks, Telendos” or the “princess” who peeps at Kalymnos?

“Oh yes! Paradise has never been nostalgia. That is the truth. Paradise has neither been a reward. Paradise has been our right…”, according to the Greek famous poet Odysseus Elytis. Paradise is our right to support and fight in our field in every way… Popi’s Harinou father comes from Telendos. That tiny heavenly island which peeps at Kalymnos.

Her grandfather had been “sphoungaras” (that means the professional diver who collects sponges from the fields of the sea). In other words, at Telendos the most of the men had been professional divers for sponges. He used to travel for sponges to Bigaza, to Egypt. Unfortunately, after three accidents, he became gimpy because of the diver’s disease. After that, her father had stopped diving for ever. That had been an unfortunate point of time because Popi’s father had just finished his stint in the army. Those were hard times. All the responsibilities of the family had moved to her father’s shoulders. He had three sisters and he should help them to make their families, too. He hadn’t had other choices but becoming a sailor as a crew of a ship to earn money. He returned to his island when he managed to pay the marriages of his five sisters. After that he made his own marriage. He became fisherman and he traveled wherever there were fish, and mainly at Cassos island. “These are the difficulties of the island. People used to leave the island for financial reasons. Everybody loved his island and none of them wanted to go away”.

Popi has grown up between Kalymnos and Telendos. All her life had been the trip of that boat, until she felt in love with George. George Trikilis came to Telendos with his parents, when he was 14 years old. His father was coming from Pserimo and his mother from Telendo. George decided to open at the island of Telendos a Coctail Bar. To make his dream come true he traveled back to Australia to work. He worked hard to set by money, and then he turned back to his paradise to make his dream come true. 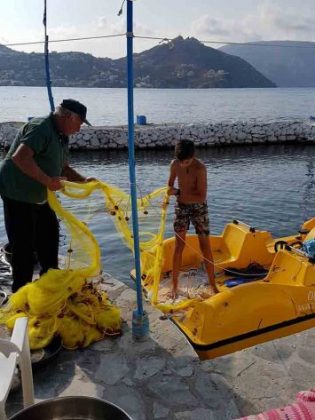 Popi’s Harinou father is a fisherman for many, many years. On the next photograph Popi and George with their beautiful family. 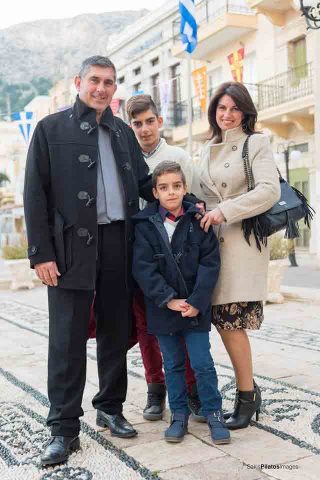 His bar opened in 1994. In 2000 Popi and George got married. The Coctail Bar turned to a restaurant called “On the rocks, Telendos”, and apartments for rent were added. Then Popi became the chef of their restaurant. “We have given our “meraki” and love. We truly respect each man who honors us”, Popi said proudly. In 2012 they constructed their own boat “The princess of Telendos”.

“We try to stay on the island. We love it. But the difficulties of the winter are many”. The most important for the families who have small children is not the lack of the health system that does not exist, but the lack of education. There is no secondary or high school. That fact makes their stay on the island complicated.

“The port of our island is small and needs restorations. That is a point of political demagogue just before the elections. We hear promises and then they forget us. Three years before we had create a cultural team. We try to make that to work again. Keep in mind that we are just a few on the island with many different opinions. Ignorance keeps us away from finding the solutions. Some of us afraid of the changes, and that is normal. But, at the same time it is necessary our island to become developed”. 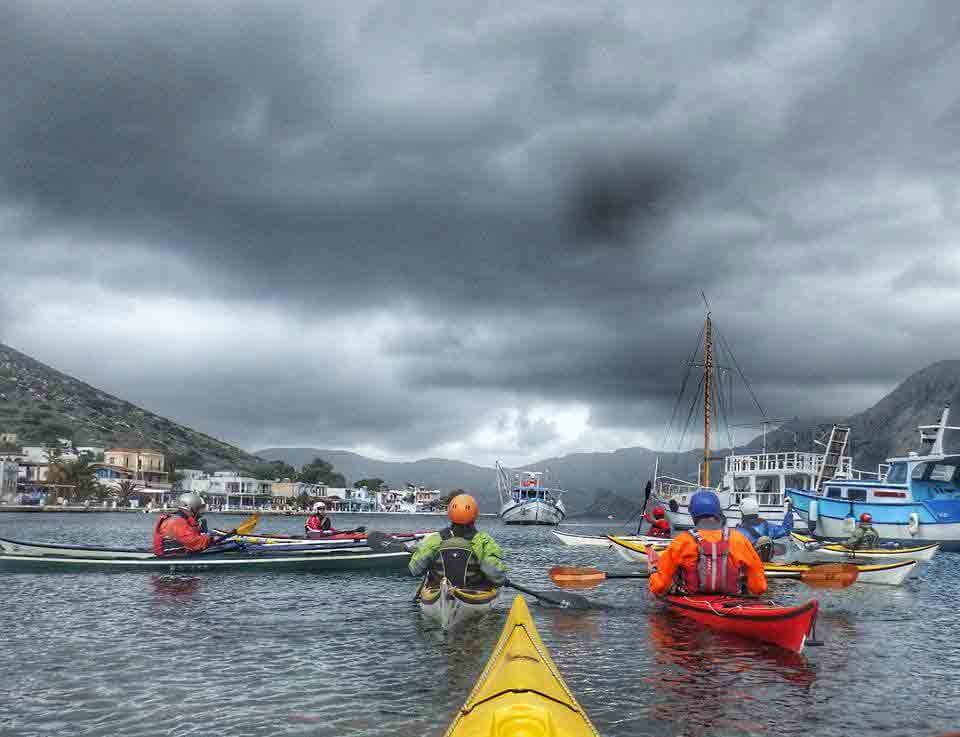 Some of them are visitors since the access on the island was by boats. Those people love the island a lot. It offers to them peace and silence, without superfluous luxury”, Popi and George commented.

Telendos, the small and peaceful island is a unique destination. The simple life is dominant. This small island chooses its visitors. Telendos is beloved or not. There is no middle situation. “On Telendos we have strangers that visit the island for more than thirty years, each year. Isn’t that unbelievable? Some of them are visitors since the access on the island was by boats. Those people love the island a lot. It offers to them peace and silence, without superfluous luxury. We have developed with them good relationships. We are looking forward to meet them again. When we finish our day, we all gather drinking and chatting. Our connection with visitors gives us energy after a hard, tiring day. Because if you don’t love your job, you can’t carry through with that”, George and Popi said, and then they continue: “One of our favorite matters to discuss is that simple things need time to be done here on the island, than in other places”.

Problems like the roads, the port, the lighting, for the visitors are easy to be solved but for the residents are hard. “The overcome after taught winter is grinding (even the cleaning of the detritus). It is right the island not to be ready when to season of the summer comes?”. 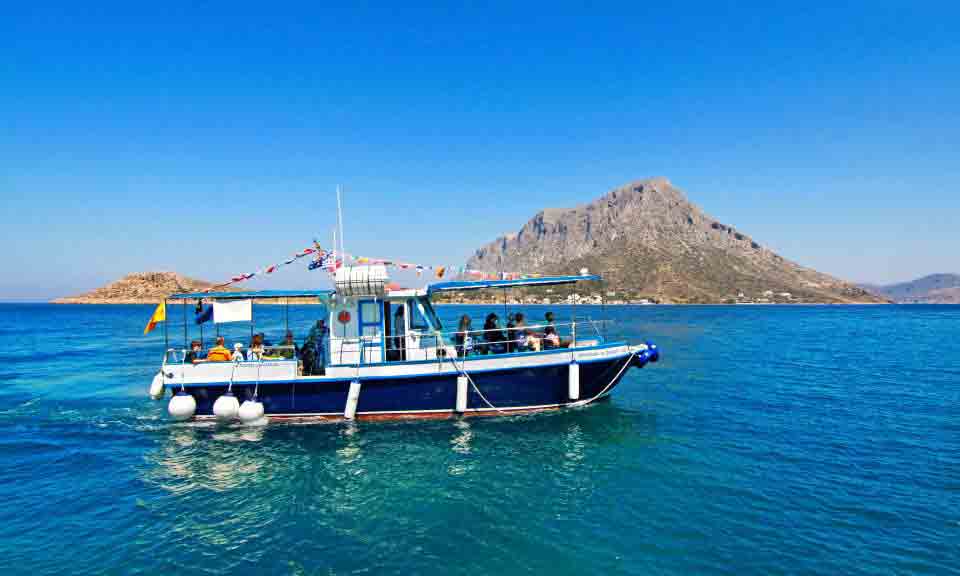 The “Princess of Telendos” on-board!

Telendos is its people. They feel disappointed from the politicians and they try being united. The source of their power is the love of the visitors, their support, care, and sharing that keeps Greece strong enough. They will find the solutions by themselves. “Yes. We should be united for the future of our island”.

On The Rocks, Telendos:

The school of Telendos and its great history!
With «TRELA» from Paris to Tinos