Our Own Mt Olympus Documentary for an Oscar!

“A lot of people have tried to present Mt. This film started its Olympus but this documentary has done the best job ever,” according to the proud and happy people present at the Dion World Premiere of ‘’Mt Olympus, the Creation’’ which is a production of ELLOPIA FILMS. This film started its beautiful trip towards the World Festival on Friday, June 24. Mt Olympus shone brightly with narrations of its beginnings which date back 250 million years and with the help of geologist Anna Rassiou. Screenplay and co-directing is by Athina Krikeli. It is a unique sight which combines knowledge going back millions of years, the power of research, the power of the picture, together with the ‘breath’ of such an important mountain.There is also co-directing by Dimitri Zisopoulo.What is more,everything ties in beautifully with harmony and music by George Hantzi and his thirty musicians.

Athina Krikeli speaks on humanstories.gr. She talks about the reason she decided to produce the twelve documentaries on Mt Olympus. However, we will also learn her personal history before we dive to the depths of such a unique mountain: ‘’I have travelled all over the world, except for New Zealand  and Australia. I have been living in New York for the past  twenty-five years and have covered large wars from 1987 to 2014. I have acquired tattoos from my trips and had eighteen operations to remind me of my pleasant  trips. I have no regrets. Every time I would return home feeling more humble and less talkative. I had this inner calm that enabled me to understand the shyest people who may even be the wisest among us. To some people it may sound strange hearing about the eighteen operations and the covering of so many wars in the world. However, I believe that whatever does not kill you makes you stronger. I am not speaking theoretically. If you wake up one morning feeling blue, as the Americans say, and you take a piece of paper and write down what is bothering you in one column and you write all the things that make you happy and proud  in the second column, you will find that the second is longer. Moreover, the first and most important thing is that you are alive!” 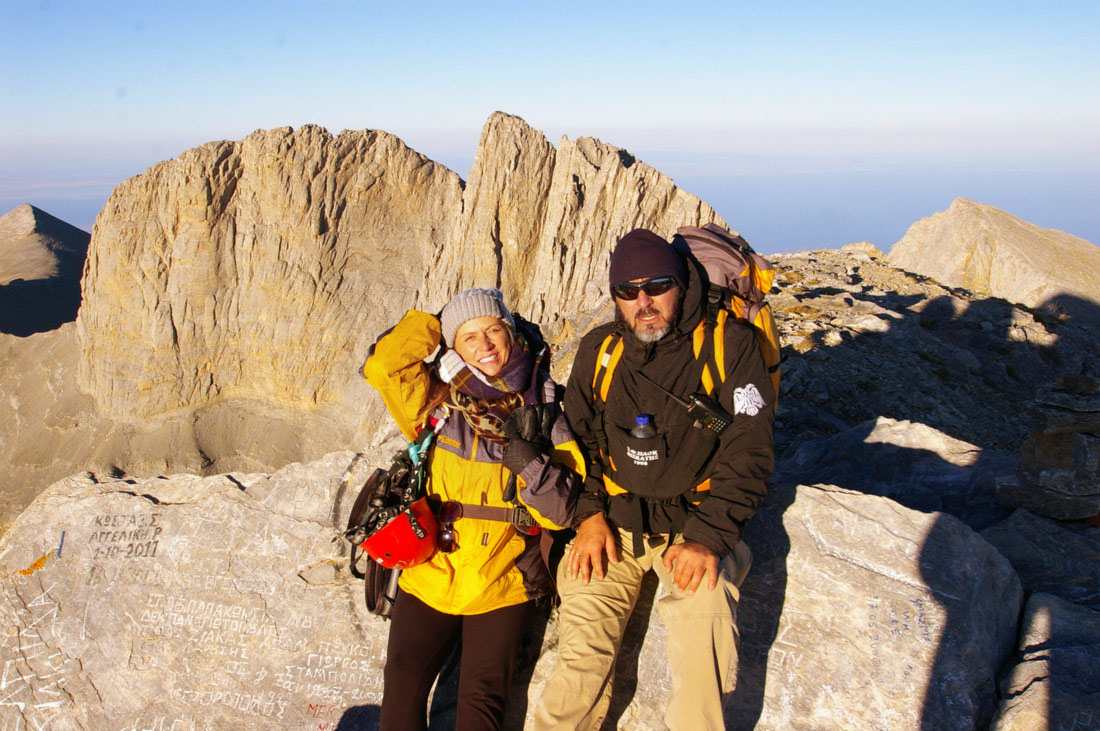 They climbed Mt Olympus fourteen times to make the documentary for ELLOPIA FILMS.

Questions of American University Students: ‘Does Mt Olympus Exist?’ ‘Is Mt Olympus a Mythological Mountain?’ And the Anger of Greeks that Turned into Creativity

However, how is it that the decision was made to go  from the first documentary to the twelfth, just like the twelve gods on Mt Olympus? Athina Krikeli explains: “Three years ago, I got to know Mt  Olympus by climbing it. I started climbing the side  of Thessalia, from Elassona, and since then we made our first documentary which may get first prize at the Festival of New York this October.(Read ‘’Elassona, the Secret Path to Mt Olympus” to find out the prizes it received.) This was played in America where the need developed to create eleven more documentaries. We made the decision due to the anger we felt after we had been invited  by the University of New York to show the documentary to science students. Afterwards, the lights went on for some questions which we had to answer. With a look of amazement on their faces, thestudentsstarted asking  questions,such as: ‘Does Mt Olympus still exist? ‘ ‘ Isn’t it a mythical mountain?’ ‘Isn’t it like the Lost Atlantis?’ In the beginning we had disagreements with the Americans. It was easy. However, we went to a second, third, fourth and fifth university. The reaction was the same with them all. Then we realized that something was not right.

“In the Internet age , when one can learn everything and anything it is hard for me to grasp that the two most well-known names on earth, Alexandros and Olympus, do not exist for the rest of the world except Greece. And I can give an example with the biggest weather platform in the world. When you log onto the Internet and search for Olympus, you will see three kinds of Olympus. One is in Ohio, USA¸the second is in New Zealand  and the third is in Cyprus. There is no Mt Olympus in Greece.

‘’I  have lived in the USA for twenty-five  years and I believe that EOT subsidizes the media so that they can promote the  beauty and sights in Greece, even though as ELLOPIA we have never received a subsidy. However, no organization has ever done anything to promote Mt Olympus or other areas in Greece. Therefore,we decided we have the possibility , the craziness,  the determination , and the wonderful partners in Greece and we can do it. We started filming with the capitalcontrols in the summer of  2015 . All my colleagues and I waited in the ATM lines to get money for gas and then we went to the mountain. That is how we made this documentary. Last summer we climbed the mountain fourteen times. The production took place in New York in winter. It took me four months to write the screenplay and YoryosHatzi was responsible  for the music,’’  she emphasized. 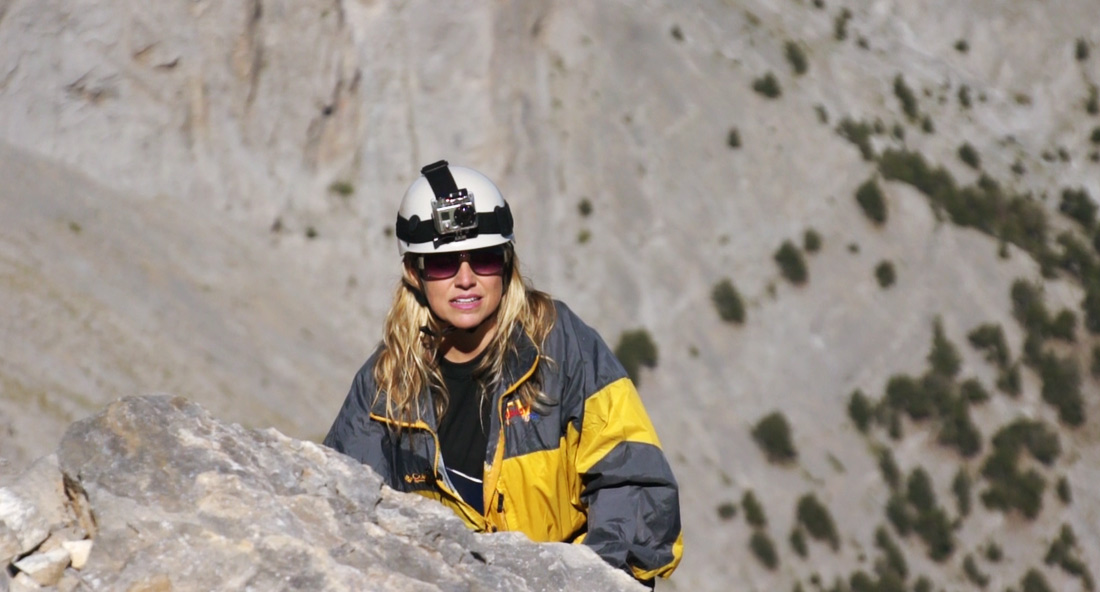 Action time at the highest summit in Greece…

The screenplay writer’s description about all that had happened to Dion leads to the depth of this exceptional documentary: “I have seen thousands of documentaries and I have been working with National Geographic. I am the  only Greek who has been voting since 1994 inNew York  and at the  preliminary procedures for the Oscar Awards. This is why I know what an American or a non-Greek wants. I know the mentality by heart. When over 1,600 people, bethey young , old, families, said the same thing…that in the end they saw the next scene as if it were in a movie we were moved . Their comments were the best award for us.

“If you see the kind of information in this documentary, you will say it is not possible… If the documentary were a book, you would run the other way, stating: ‘You are crazy if you believe I will sit down and learn all this stuff.’ However, the strength of the picture, the text, and the inconceivable music of Mr. Hatzi all led to a documentary of high quality. The viewers gave a standing ovation lasting five minutes in the end. They said they had watched something grand. Suddenly, Mt Olympus, which had been  seen  as something ordinary, changed and became something great through a documentary. There were people who were so moved they cried, one reason being that we were able to  combine  science , history and mythology.  We went back 250 million years when Mt Olympus was still just  a beach in Africa before the movement of the tectonic plates. This was possible because of  AnnaRassiou’s research. The documentary had to do with a geological approach and the geological advantage that Mt Olympus has. It was as if scientists were asking for confirmation from Homer and Isiodo. This is the  impression  I got. Together with the ancient Greeks , we made the effort to show modern individuals why Mt Olympus was so important.’’

We asked Athina Krikeli what Mt Olympus means to her, and she answered emotionally,

‘’It changedmy  life.Each time I climb Mt Olympus I feel have to ask for permission quite humbly because I am imposing on Greek land that is unique. I feel like I am entering a highly personal area. Mt Olympus leaves its impression on everyone, be they educated or not, young or old, foreign or native. Something that was written in the screenplay and shown in the documentary was what David Washington said: ‘Mt Olympus is not a destination on a journey; it is  a destination on existence’’’ 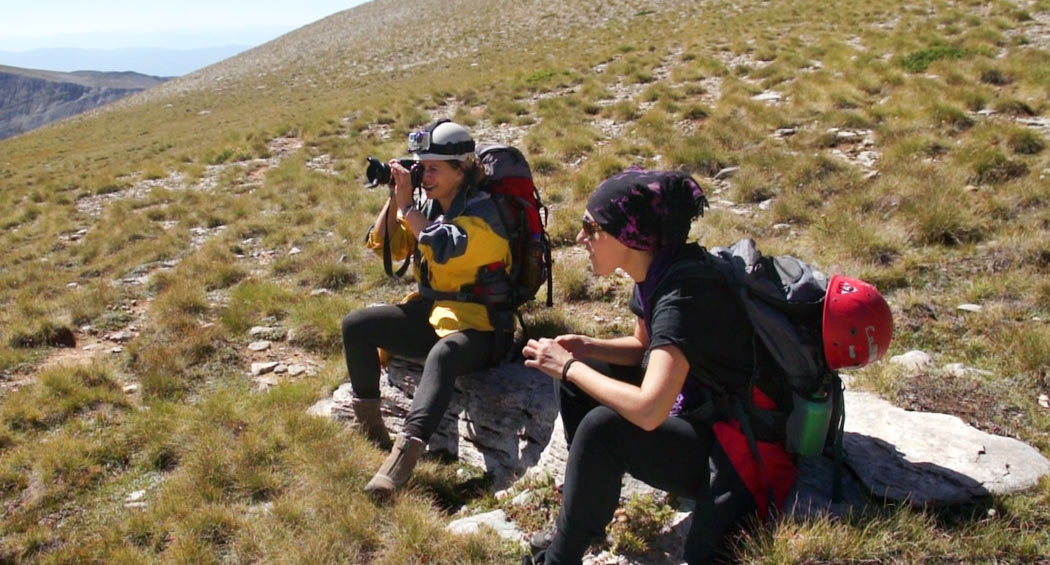 The documentary ‘’Mt Olympus,the Creation” is in English but subtitles have been added so that viewers in Greece  can watch. According to Athina Krikeli the documentary has begun its trip abroad with a destination for the Oscar  nominations! All summer we are showing the documentary in Greece   where there is a great interest in it. We cannot show it on television or on the Internet because it is on its way to the festival. Festivals are generally not strict, but the Oscar awards are. After the World Premiere in Dion, the documentary has to go  to America  and be shown in New York for one week. Then it will be shown in Los Angeles and written about in the New York Times. These will determine our nominations.

‘’I will  be  in  Greece until October 5, since we have already started the filming of our third documentary entitled ‘’Macedonia: the Gate to Mount Olympus”. 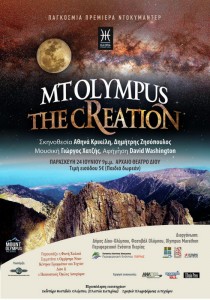 A poster on the unique documentary on Mt Olympus that impressed 2,000 people at its world premiere.

«I have never felt like refugee, but i have faced a lot of racism»
Proud as a Greek Woman and Worried as an Australian