Spyros Soulis and Yanna Papasava are citizens of the globe. They belong to a special category of Greeks who left the choice of immigration, and came back in Greece; they left Australia to come in Greece. They came back home to keep in touch with their family, their friends, to feel the sun, to live as Greeks with their children. Spyros and Yanna are back to Greece for another reason; when a man promises to his wife something, he fulfills that. Who are we if we can’t keep our promises anyway?

Spyros was born in Australia where he studied education. But, he had been back to Greece for other twelve years. He met with Yanna and married her in 2004. “We had met at my sister’s school of languages in Patra”, Yanna said and added “Spyros was teaching English language after his adventure on Mount Everest. He was the coordinator of the successful Greek mission”.

Yanna had taken her decision to teach the Greek language in Melbourne and she tells to us her story.

Yanna is a teacher. At that time she was attending a kind of seminars about “Greek language as the second language”. “I had decided that I was interested to become posted Greek teacher abroad . At that period I was taking Italian lessons because I wanted to go at Milano, but Spyros was Australian and I made my posting to Australia”. In 2007 we went to Melbourne. This was one of my dreams; to become posted Greek teacher and I had finally made that”.

That’s how the trip of their lives begins. Yanna has made her dreams come true. She has been working as a teacher in many elementary or secondary schools of Australia, at public or non-public schools, and colleges. All this experience has made Yanna a better teacher; “…in the case you teach Greek language as a foreign language.”, she comments. “Many of my students were third or fourth generation coming from mixed international marriages”. Indeed, Yanna has written a book for the Greek community which is about learning Greek in the first class of elementary school. She has also made workshops appealing to teachers in learning Greek language by the use of ipad through a relevant program. Yanna has work for the Greek community for three years at “advanceschool” which appeal to children who freshly arrived from Greece.  The trip of their lives in Australia was completed ten years after. Spyros has given to his beloved wife a promise; they would return to Greece after Yanna’s closing date in the educational system of Australia, i.e. 3 – 5 years after. Finally, ten years after living in Australia the promise had been caried out. Fortunately, Spyros had kept his promise.

Greece and Australia are two countries with many differences. We can’t find any analogies between those countries. Spyros and Yanna say that there is no perfect country, and that life is hard  everywhere. “Life is chaotic.There is no organization . Life is hard. That’s why you need to find a method to manage life”, Spyros said and added “In Greece we allow the misery. Greeks need to take the responsibility by themselves and do something. Politicians are not the only responsible. Personally, I do not see any difference of the Greece of 2007 or at the present Greece.”

“Being the difference in our society is the challenging point for us, and, conclusively, we want affecting positively our society to become better. Patra is a small city and we believe that we could offer much more”, Yanna added.

There had been a variety of reactions of other people towards Spyros and Yanna’s decision. Some of them believe they are weird, but others encourage them. “The newcomers of Greece think we were loony. Greeks who had been there for four or five years tell us that we are doing the right thing, and that they want to come back one day too. Australians who are well informed at financial matters believe that Greece has the possibilities for development in the future. They realize the totally different way of life and support our decision. We have been confident for our decision.”, Yanna said.

But Spyros, the questioning mind of the family, has the opinion that everyone has a different view about matters. “I’ve been always the weird phenomenon of my society in Australia and here too. I see as weird personalities all those who wake up every morning, then go to job, comeback home at 7 in the evening; they do all that every day, every week, every month, every year, until they die. Greeks love to live their lives. I came back at this country to live my life which is short and valuable. My decision is not related with my professional profile or the money that I want. We’ve come back to be in touch with our family. To live in healthy climate, in a geographical place which is unique all over the globe. I support this opinion because I have traveled to each one of the continents. For all those and many more reasons we’ve came back to Greece…”.

Spyros and Yanna with their two children, smiley and full of energy for the life…

The last four months Spyros, Yanna, and their children Orestis and Melina live in Patra. They all adapt themselves in the new environment, into the arms of beloved people. “The final decision came up by the criterion of children’s age. We want the best for our children. That’s why we had chosen to come back …the sooner the better. Now that our children are just kids and could be adapted in different ways of life, and to a different educational system”,  they both said. “School has the 20% of knowledge. The rest are coming from different domains of life, par example the family, trips, and friends. We want our children to have new experiences, to live in different ways, to live different situations. Life is rough and they need to live it if they want to understand its value”.

Spyros and Yanna have dreams and they are sure that they will make it come true. The one that Spyros wants is to be the right father and the right husband, to smile, to play with his kids and travel a lot with them. “The professional part doesn’t’t electrify me. Job is job. The matter is for children to learn more, having different experiences. I make dreams for mountains, trips, and sports. I want to live everyday like it would be the last one because none knows what come next”. 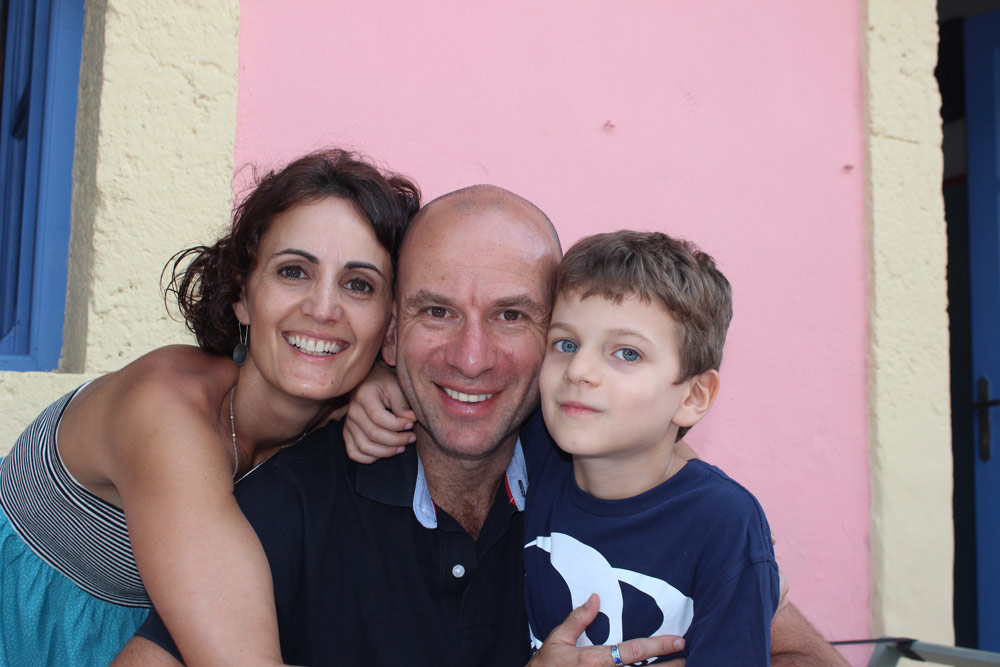 To our question “ if there are opportunities in the Greece of crisis” Spyros gives the answer that opportunities are only in the crisis environment. “I live in Greece four months and I have seen many opportunities. The point is having good cooperation with honest persons and care to work. There is no need for money, but vision, care and work. The basic domain in Greece is tourism where Greece uses only the 20%. Greece has the possibility for 12 months of tourism per year. Greece has lack of system and lack of strategy. Also, the there is lack of long-range planning in such matters. Don’t forget Onasis had made money into that crisis”. “The opportunity is here to re-establish ourselves and find new matters to care and work.” Yanna added.

There is no one Ithaca for Spyros’ family. The trip to Ithaca is the matter. The beauty of life is the unknown. Ithaca maybe is the end. “We want to have good time wherever we live. If we are looking just the future, we lose the present life. We are citizens of the globe. The one that matters is to be together as a family, to care for each other and having good time wherever we are”.

Isle of olive in between Greece and London
The man who made the refugees happy!