The Life Goddess (Amaltheia) by the Greek culture gastronomy

The Greek food has been always something like ritual. The experience of feeling and tasting begins with products of mother earth and finishes with a great feast around the table where family and friends are gathered to share their homemade gastronomy and communicate with each other. The symbolisms of preparing and sharing food are a culture of respect, gratitude, friendship, love, philotimo (a Greek social value)…

Here is the “The life goddess” logo with Amaltheia (the holy goat who grew up ancient God Zeus).

That Greek culture had been the beginning point of view of “The life goddess” in London. “Our little goat”, as George Nymfoudis notes. George is one of the three men that have made their dream come true. That has been their passion for Greek gastronomy.

The beginning was on 2011. The founders were three men: George Nymfoudis, Nick Nymfoudis and Elias Koulakiotis. The “life goddess” functions like a little restaurant, but its point is the delicatessen domain which has 300 different products, most of them are “TLG smallgoat” with unique tastes, recipes …and a lot of love! 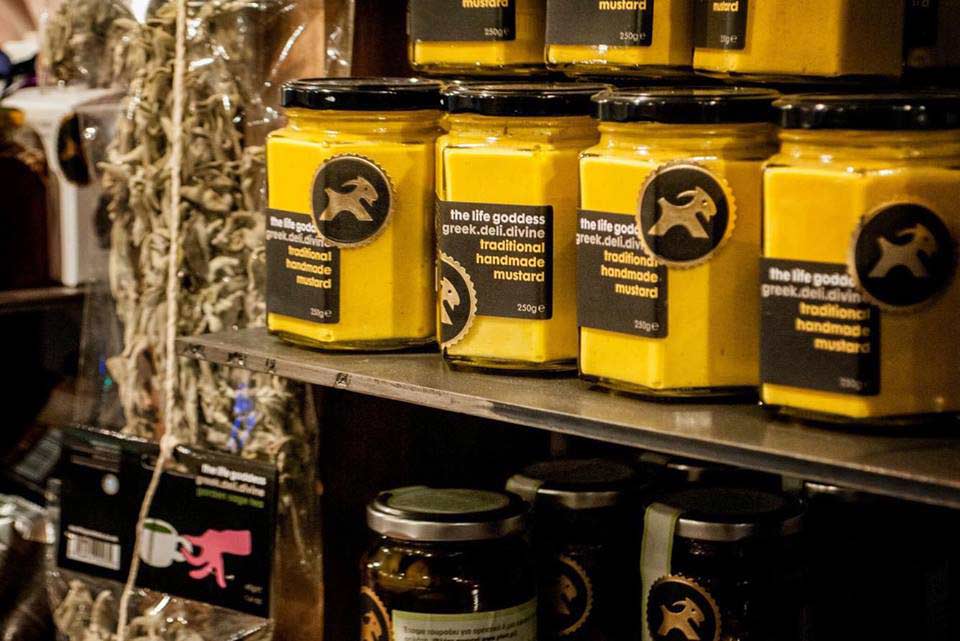 The most attractive point is the delicatessen of 300 products…

George Nymfoudis was born in Pylaia, an urban apartment of east Thessaloniki. He has a family who loves Greek food of mother earth. He comes from a land with gardens and orchards. He grew up in there with his family. “ I am full of pictures, tastes, perfumes, and love which I give to people in London”,  George said to Human Stories. “My passion about food has begun many years ago, since I was a child. I was exploring all these tastes that now  I give to Londoners with a lot of  love…”

George has been to London when his brother went there to study at Portsmouth. “London is the city that you can fall in love with it from the very first sight. And that reason explains why I live here permanently”. George said. “I was tired of the crisis and the lack of motivations in Greece. Accompanied by my craziest family (my wife Argyro and my children Stavros and Afrodite) we decided to live in London. The first year here in London was an unforgettable experience. I will remember that for my whole life, …That had been too difficult, too cold, too misfit. But when family is united the time that passes becomes fruitful. Today, five years after that starting point in London, I am still in love with London and most of that I am in love with its countryside where my family lives. I hope to make one more dream come true; gastronomy into farms”.

One of the most cool and tasty restaurants in London…

Nothing is a coincidence about the “lifegoddess”. During that trip where the dream came true, the most important parameter was that the partners were good enough. The “lifegoddess” has a high quality of aesthetic which is the art of Argyro’s Vlachou and Peter’s Frangopoulos Architectural office IDEA. Both Argyro and Peter have made all the design of the store. The mascot of lifedoddess is the little goat of Amaltheia.

Goat Amaltheia was feeding baby Zeus with milk. Together with Melissa and the mythical Kourites, Amaltheia helped the adventurous birth and the nurture of Zeus, the most powerful God among the 12 Gods of mount Olympus. Zeus would rule everything when he would grow up, and he should be ready to win for his throne.

At the relevant mythology there is a story that one day Amaltheia was playing with Zeus, but Zeus broke her horn. Zeus who didn’t want to upset Amaltheia and as a gratitude to her, he  transformed the horn to a source of plenty. The horn would make true each will of its master. That was the myth that is known as “Amaltheia’s horn”, an eternal symbol of plenty. Graphics, design, logo, brand, and all the labels are designed by the “beetroot”. “An idea needs a hard working team to make the dream come true!”

The one who will visit the restaurant, will taste Greek flavors to each of his or her bite!

One year before the “Lifegoddess” was created, George had traveled to every Greek land to meet great Greek producers. The “Life goddess” cooperates with such producers. “Greek producers offer with all of their heart the products of Greek earth! All of them are special products. The “Lifegoddess” has 100% fresh materials all over the country of Greece. Cheese and delicatessen from our islands, and all over Greece. Wine from the North or the South, from East or West. An engagement of Greek tastes with unique products from all over our country!”.

Wines have special space on the shelves. Wine is the king of all products… “The Greek wines cover the best space. Olive oil, olives of Kalamata and Halkidiki, marmalades, spaghetti, pulses. Many codes from Naxos, Crete, Rodopi, Naoussa, Goumenissa, Grevena. Products from each piece of Greek earth are there to give satisfaction to our customers”.

Lifegoddess has created a special space for the wines.

The plenty of Greek earth inspires the founders of the “lifegoddess”. “The Greek gastronomy transfers all our customers to that magic place which has inspired us to make the dream come true!”

The “lifegoddess” has become spot for many young people who go to London. Also, the staff is almost Greek about the 95% of them. That’s where he had the luck to cooperate with very capable chef… “Now we have the joy to cooperate with Nick Tzouma (anassa restaurant),  the winner of gold caps, the ambassador of gastronomy coming from Thessaloniki , and Constantine Mpita”. “Although, all these wouldn’t become true, without our beloved partners. With good cooperation we managed an excellent outcome! We thank them with all of our hearts!”

The “lifegoddess” did brought Greece and Greek production into the heart of London; the plenty of a food culture which includes a real feeling of completeness. “This is an experience which we want to create for each one of our customers. “The tiny goat of plenty did managed to become the ambassador of a small country with love, faith and patience. A small country which continues keeping alive the ritual of Greek food feast till nowadays.

The man who made the refugees happy!
«Οne quarter Greek» by Nicoletta Barbata