Londoners experience an awesome tasty trip by the …”The Athenian”

Everything begins from the word “inspiration”. On that word we add “meraki” (Greek word which means a creative view full of joy and love) and “work”. And accordingly to our grade of try, we touch the success point. Efthymi’s and Neofyto’s  source of inspiration for cooking comes from a village of the mountains of Crete Island , called Vamos. Mrs Koula has shared with them secret recipes which they have re-invent in neighborhoods of London.

Efthymis Vassilakis comes from Athens. In 2003 he moved to Scotland for studies. And after 3 years he moved to the world known London. Neofytos Christodoulou comes from Cyprus. In 2003 he moved to Cambridge for his studies and since 2007 he lives in London. Neofytos had  its own street countertop where he was selling hand-made Greek “loukoumades” . That had been a period when “The Athenian. Greek Street Food” had almost begun. Efthimis had seen that Neofytos had uploaded at Twitter a photograph having loukoumades, and he decided  to send to Neofytos inbox if he was interested in making an event that would sell Greek “souvlaki” and Greek “loukoumades”! 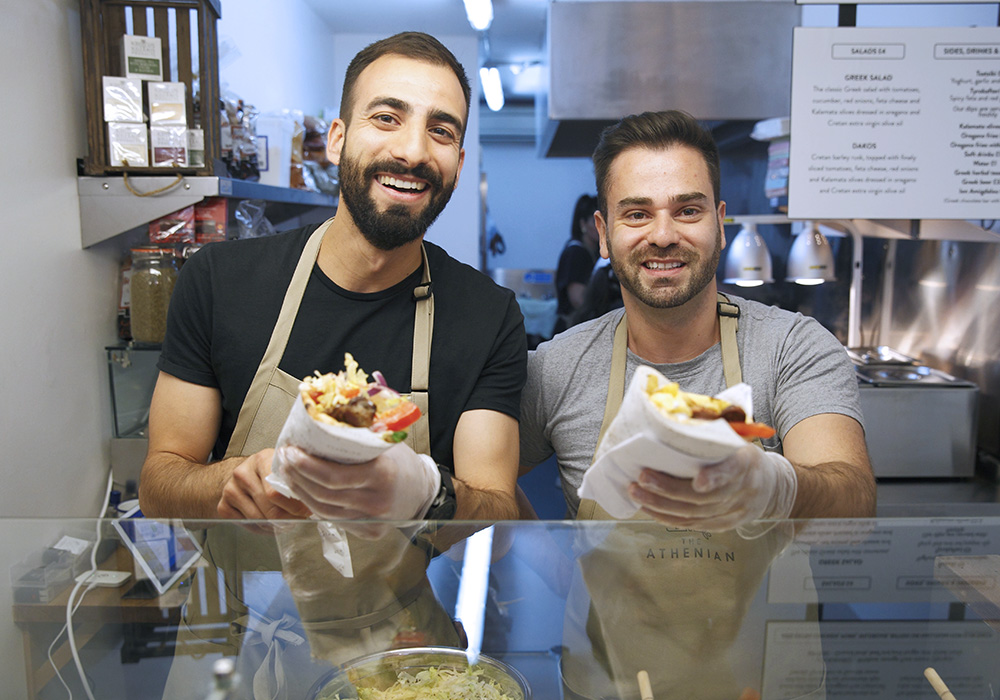 In a way like that they started their delicious voyage. An Athenian and a Cypriot have united their gourmet horizons and they have created “The Athenian”, the Greek fast-food restaurant. Their logo is the tiny owl of wisdom that is the symbol of Olympian goddess Athena, and that is designed by NicolaZamboni and Brazilian illustrator Fernando Volken Togni.

“Athenian started up because we wanted to find souvlaki that would be like that we used to eat in Athens, something that we couldn’t find after many years of our stay in London. We were very disappointed with the options of Greek food here in London. So, we decided to open our own souvlaki restaurant with the same  recipes that we used to eat that  in Athens “. Why “Athenian”?  Because the most famous souvlaki in Greece is the Athenian, but also because Efthymis comes from Athens”.

“The Athenian” stands out for the designer’s simple yet delicated lines while the blue touches on the dishes remind Greece so much. Children, together with the “The Athenian” team, make a totally organized and well programmed job. By social media interplay, and photographing, they inform everyday their clients. “At the beginning everything was fulfilled by Efthimis and Neofytos, at their free time of wrapping (souvlakia)! It is obvious that they did not have a lot of free time! Now, at the backstage there is a whole team responsible for anything that does not have to do with wrapping; that is the domain of marketing, recruitment, finance, public relations and photographing ” Nick Papageorgiou said (member of the Athenian working team).

But what is the specialty of the “TheAthenian” souvlaki? “Here, at Athenian, we try to offer to our customers “souvlaki” that someone would found that living in Athens. Having this principal, all of our products are directly imported by small, independent Greek suppliers. Also, the souvlaki or the round (a kind of smashed meat wrapped as souvlaki) is a food that is accessible to everyone, whether you are in Greece or Cyprus. This is something we are trying to keep here in Britain; the big difference at “fast food” domain between Greece and London  is that in London you will spend at least 10 euros to eat “something fast” but that is on the contrary by the Greek identified culture of eating souvlaki! That’s why we’re doing our best to keep our prices as low as we can by other competitors offering in that way a really authentic Athenian souvlaki! One of the best comments we have received is about our sauce; a girl called it the “Magicsauce” tagged “# in heaven”.

A girl called “Magic” the added sauce on meat tagged #in-heaven “… better advertising than your own customer does not exist!”.

Food brings people in contact. Through the “Athenian”, Efthymis and Neofytos try to give the feeling of Greek hospitality … “Everyone of our staff is integrated in being polite and hospitable. We try to keep the energy of “welcome” all of our restaurants and the way we are represented in social media, ” Efthymis said proudly at HumanStories.

Although the two men give special attention to the quality of Greek products they use. Oil from Crete, Olives from Kalamata, Feta from Peloponnese, Haloumi Talagani from Messinia, Herbs from Karpenissi. “We are very proud to be able to use materials of the highest quality. Because we (as a Greek company) feel that we also represent Greek cuisine entirely abroad. So we take every opportunity to share with the world all the selected products that Greece has to offer “.

“Athenian’s goal has always “to be shared” and “to be expanded” at London in order that more and more people could learn about what Greek cuisine is and of course to enjoy all the delicacies that Greece has to offer”. This goal is slowly taking place. The brand new restaurant “theAthenian” is a fact … “We just managed to open our first big restaurant where we can bring traditional pumpkin balls, cheesecakes and  tomato balls, something rarely found anywhere abroad! By this concept, we would like to walk; to take steps that will allow us to provide our chosen souvlaki to most people we could …”

We the Humanstories.gr, wish to Efthymis and Neofytos that to become true. “Because everything that the soul wishes, that it succeeds” Seneca.

«We have to explain the meaning of those unique Greek foods; souvlaki is made of meat and salad, wrapped in a flatbread, and loukoumades are candies made of dough cooked in olive oil spread with honey and cinnamon», said Efthimis and Neofytos.