The Greek Woman Who “Enchanted” the New York Times

Recently there has been talk that a lot of remarkable young adults have been moving abroad, thereby leading to a brain drain, because Greece is incapable of helping or of making good use of its youth. Such talk is based on fact. According to an unofficial opinion poll about 800,000 Greek people emigrated during the last three to four years when the economic crisis reached dangerous levels.

However, Humanstories.gr was not created to encourage an atmosphereof  irritability and grumpiness. On the contrary, it was created to give hope through identification with and inspiration of important people who share  their unique stories with us.

One such individual is twenty-seven-year old Katerina Iliakopoulou from Alexandroupoli who  was hired by a media giant, the New York Times, because of her innovative post-graduate degree at Columbia University. She explains how she was hired during her return trip to her homeland for a one-month vacation.

“In 2012 I graduated from the Department of Electrical Engineering and Computer Engineering from Aristotle University and later worked for the Institute of Information Technology and Telematics, which is part of  EKETA in Thermi. We worked with researcher, IoannisKompatsiari, on the project Socialsensor in which we developed and Internet platform tool for reporters. It was through this that I developed both a curiosity for and an interest in journalism.Then I decided to applyfor post-graduate studies. I was accepted at Oxford, Imperial College of London, London School of Economics and NYU,but I chose Columbia because it offers a unique post-graduate program in both the science of computers and  journalism. This specific program accepts a few applicants each year and all applicants must fulfill the requirements of both the School of Computer Science and the School of Journalism…” reminisces Katerina who always has a smile on her face.

She adds, “In order to acquire a post-graduate degree you have to do a thesis on a subject that you yourself choose but the subject must relate to the program. This program requires a knowledge of how to use the science of Information Technology to enhance journalism. I, therefore, made a software which automatically files issues and helps in searching through the right keywords. It can b applied to advertising and it can present articles to each user and much more…”

Katerina adds, “Although the above process looks simple, it is not applied by many groups of journalists in America and in Greece…since Greece is not advanced. Everything is done by hand. Each person reads all the articles and then chooses the keywords.  Sometimes people forget important keywords. For example, maybe they are looking for information on the Greek crisis but they may not connect it to Troika or the International Monetary Fund and other keywords. As a result, when they look under Troika they will not find a specific article.

“I did my internship at the New York Times at the beginning of the past summer and they helped me with the 15,000 articles  they had given me. I instructed the algorithm that I had made to make it smart enough to understand the right keywords to conclude ,because it continues to see certain words, which keywords to suggest. For example, it sees the article International Monetary Fund, Tsipras and concludes it must suggest Troika or it may read “immigrants” and then suggest “Syria”. Also, since users have their own habits, the algorithm is instructed to adjust to these habits, “ says Katerina.  She continues:

“I made the algorithm so that it can be an open source. Already it is available online in the English language and can be used by anybody. My original goal was to make something for small journalist organizations that do not have the money to buy expensive products. The New York Times has bought automatic systems that do the job for them up to a certain extent. I started this, together with my post-graduate degree, in October of 2015 and finished in April of 2016. I spoke to four of the biggest journalist organizations in the United States and they told me exactly what was needed by the system. Then I built it around what they had referred to . I was the given a prize in computer journalism, that is, for my contribution to the field of Information Technology as applied to journalism. I have been working for the New York Times since last October as an engineer in the Department of Technology. My group is responsible for helping the users to create a personal experience. That is, when users register on a site and log in, we see what they are interested in, create a more personal experience and suggest articles while they are reading or we suggest how to read the original page based on their interests. Even the newsletter is personal for each user.While the users are on the site we look at how long they take to read each article , which article appeals to them, and what they look for. Then we understand their preferences.”. 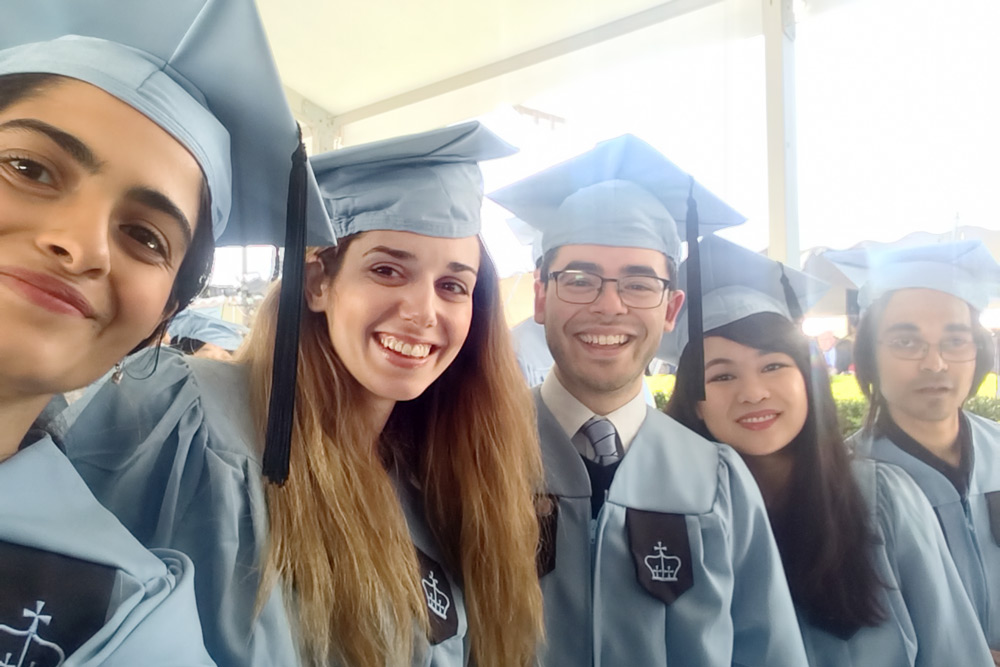 Her Motto: If Someone Stops Thinking about Making a Dream Come True and Actually Takes Steps to Make It Come True Then Everything Is Possible

Even though Katerina has found her dream job, she frequently think about returning to her homeland. She explains why: “Greece has such nice things and can offer a lot, but the management of things is difficult. There are not many opportunities offered to young people. I hope this changes in the future so that I, together with many others, can return to Greece. I also hope to apply what I learned to Greece so that I can help growth to a certain degree. I would not want to return only to end up doing nothing and consequently end up emigrating again.”

Katerina Iliakopoulou is a young adult who has always looked for outlets that will expand her horizons. The crisis helped her do this. She confesses: “At Columbia I felt I had received a good foundation from Aristotle University .Foreign universities are no better when it comes to learning material. However, Columbia encourages learning and creativity. Greece “kills” this. There is the feeling that you read and work hard and you do not know why. Maybe it is to get a degree to please your parents. In America you learn in order to cultivate your mind and your character and to make progress in life. This has changed my life.”

It’s all Greek to Me… Original Qualitative Cuisine in central London!
After Fifteen Space Missions, He Dreams of ‘’Introducing” the Universe to Children