On August 28, 1963, in Washington, DC, Martin Luther King, in front of 250,000 peace and human rights protesters, chanted the legendary “I have a dream.”  The Societies and history evolving from people who have a dream and who stubbornly pursue it, even if to others they look like modern Don Quixote’s. From people who are falling down seven times but they are standing up eight. Humanstories.gr would like to introduce such a person to our readers. A human story that continues to evolve with successes and failures. The last stop of this story is “Staramaki”. “A social cooperative enterprise based in the city of Kilkis, takes out an ecological straw from wheat stalks, in response to the problem that exists with the reckless use of disposable plastic,” describes Stefanos Kamperis.

“I was born and raised in Thessaloniki,” Stefanos told me in an earlier interview we had done together for OMNES. “My grandfather came from Sokhumi in 1926. At that time, they were given houses in the village of Kentriko in the municipality of Kroussa in Kilkis. That is one of the thirteen villages that mining industry wants to destroy. In 2010, I came to the village from Thessaloniki, because I believed and I still believe that if you want to get people to fight for something with you, you cannot do it from afar. You have to be part of the community. You cannot tell to the people, from your city, that the mine is not good and that they should fight against it. But now, I’m part of the community. I tried to do various things in the village, but I did not succeed. I tried to do things, with collaborations, but it is not an easy thing to collaborate. In 2014 I started thinking that I should leave the village. But then Idomeni started and decided to stay. Then OMNES came. These ideas are not mine. It is the result of a social perception that emerges living here “says Stefanos and adds:” I was disappointed a thousand times. They say, that is ok to “fall down seven times and get up eight”. That’s the whole point and I’m happy with everything that has been done. Not everything was done perfectly, not everything was done right, but things were done. And getting things done and seeing them happening, is very important. To see people living in houses, to close a camp, to create an economy, to talk about a word that did not exist before, “Staramaki”, is very optimistic. With a lot of perseverance and patience, with the right organization and plan, things can be done. We must not be just miserable. We have to try and finally things happen “. 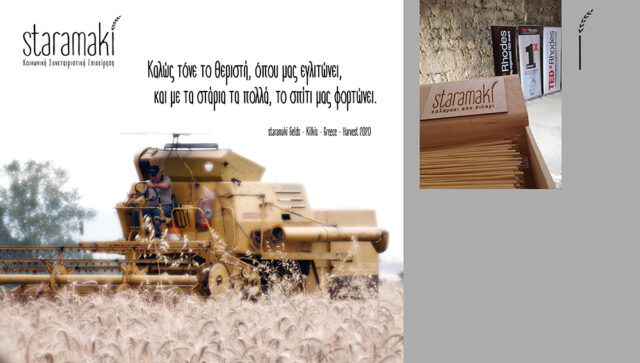 Stefanos is an engineer. Returning to his choice to leave Thessaloniki, he continues: “I left the city during the economical crisis. I felt that I was in front of a dead end. I felt fear and uncertainty. I wanted to move as autonomously as I could. My goal was to create my own energy. My own food.  To feel this sense of freedom. Unfortunately, I did not achieve such things. The truth is, that I just found people who had the same concerns with me and that was very crucial. Because relationships, are created under such conditions.  We fought with the same people and we are still fighting the mines in Kilkis. Kilkis is the second mine in a row after Khalkidhiki. But here, there is Uranium also.  We do not consider these metals, like gold, a growth lever for the place. We consider food, air, mountains and water, much more valuable for everyone and we will fight for it like many others and we will win. “

From Aid to Trade

While Stefanos was the leader of OMNES, he had also another dream. To change the approach that everyone had regarding the management of the refugee crisis. “From Aid, to Trade” was his motto. He wanted to change, the way the whole system works, which was, is and will stay incomplete. To change it, from a system that would simply give help, to a system where it would have economic interaction and move from aid to exchange. In a reciprocal economy, which would support both refugees and local communities as well as the countries that contributed financially to the refugee issue. But all this, for the big NGOs, the governments and the Organizations, is fine print. There is an easy and a difficult way to achieve things. Stefanos suggested the difficult because he knew and knows that in the end, the difficult road is the easiest and the easy one is the most difficult. Through this process, Staramaki emerged. “Staramaki is more than just a product from a straw of wheat “says Stefanos and continues:” it is our answer to the multifaceted crisis we are facing in the region. A crisis that has the environment in one side and intense urbanization in the other. That is, the phenomenon of young people leaving the villages and going first to the cities and from there abroad. The phenomenon of social exclusion or employment integration, enabling vulnerable social groups to work. So Staramaki is much more than a product. It is a whole philosophy and attitude of life, which we have put into practice and we are waiting to see if it will be able to step on its feet. The competitive society we live in has brought us to the current situation. With the problems we experience either in the environment or in the social inequalities that have intensified. Our model responds to this thing in many ways. Indicatively, out of the 17 goals of the United Nations, Staramaki, treads and is in line with five of those that have to do with gender equality, the reduction of discrimination. To us, the percentage of men and women is the same. People from vulnerable social groups are working here.  The energy we will use will be from the biomass itself, which will be produced. Staramaki has to do with ethical consumption and ethical production. Our proposal has the component of innovation, but touches on multifaceted and social issues. We can say that the people created us. They embraced us and this strength and hope of them, is giving us strength and hope also “.

But what is Staramaki beyond an answer? “Staramaki is an ecologically recyclable straw. It is a form of wheat, which has the necessary morphological characteristics needed to create such a product. Suitable height, length, diameter, wall thickness. Wheat is more interesting for what we do, because wheat has waxy substances on its outer surface, which make it hydrophobic and so it does not soak “explains Stefanos and continues:” Currently in Staramaki, we work 11 people. Two of them are people who left their countries because of the hardships of war. The work is very intense. There are still stages that require a lot of manual labor in production. Gradually, these stages are automated, so that we eleven can produce much more and that the production cost can simply decrease. We are trying  to configure the price so that it allows ethical working conditions and this will be done through automation, obviously, in order for Staramaki to be accessible to everyone “. 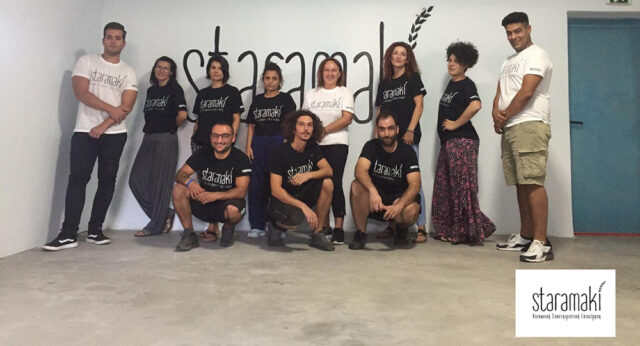 Staramaki started in Kilkis, but it is not only cultivated in Kilkis. “It is not right to have a field in a single area” says Stefanos and continues: “The weather conditions are unstable. The climate has been severely damaged, resulting in sudden extreme weather events. This has led us to have a strategic plan in the sense that there are multiple production points. This year we harvested from three areas. From Gorgopi, Kilkis and Archangelos in Pella. Next year we will go to Grevena, while we also have some experimental fields in Larissa. So, this will gradually expand and the local rural communities there will be integrated as well “. 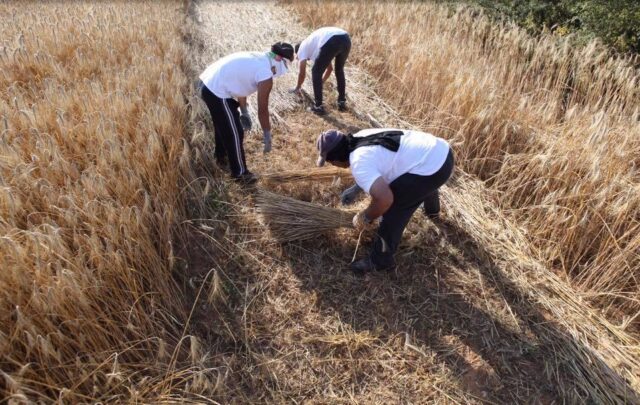 All this was not easy to do. “What we do first of all is cooperative. The social economy is the economy of the group. It takes a team to become one “says Stefanos and continues:” In the beginning there was distrust regarding what we do. That is always the case. No one is a prophet in his own land. Step by step, as long as people know what we are doing, they trust us. Some get excited, and some are laughing. That’s life. There are people who are skeptical, there are people who are passionate. A similar model to what we do in KoinSep, appeared in the early 1916-1920 with the creation of the then agricultural bank and the proposal of agricultural cooperatives, which led to a very strange situation and at the moment most cooperatives are like ghosts. Cooperatives were created because the bank was not giving loans to individual farmers, because they could not produce what the market demanded, so they could not repay the loans. So the bank, proposed the establishment of cooperatives, where the security for the loans they were giving, was bigger. Unfortunately, most farmers did not cooperate seeing the prospect in the cooperative, but cooperated in order to get money. But this is not what the cooperative wants. What is required is the exploitation of the possibilities. Money should not be a target on itself. And KoinSep must pay attention and highlight these features that need to be. Do not make the same mistakes, because unfortunately they are shadow over cooperative attempts in Greece “.

Staramaki as KoinSep has already a year of life. Things are not perfect, but they are encouraging. In any case, Stefanos will never stop dreaming. After all, those who know him intimately can confirm that he would agree with the Irish writer George Moore, who wrote: “Reality can destroy a dream. Why the dream cannot destroy reality? “

Breathless in Pazarkule
The heroine "Woman of Olympus"