A CrazyCello with Humour and Originality

Music brings people closer together and joins cultures. It also relaxes the mind. The pictures clear thoughts. It leads us to places that are far and near. It leads us to the absolute azure blue, to places that we strongly desire. Alexandros Botini combined melody with the strength of the picture. He was inspired by the beauty of Greece and succeeded in showing through videos and CrazyCello places in Greece. He is ambassador of Greece, the land that we love.

Alexandros was born in Moscow and his grandfather is from Milia, Fokidas and his grandmother is from Samarina. He grew up in Patra where he developed an interest in the cello. He also studies in both France and Russia. He has been living in Athens, near the beautiful Acropolis, for the last two years. His interest in classical music goes back to when he was a young boy. He feels lucky because there has always been music in his house. He says with pride,” My parents and siblings, my whole family are musicians.”

I met Alexandros on social media. I saw him on the video “My Red Apple” and the harmony between the picture and the melody filled me with enthusiasm. In my imagination I travelled on his boat and found myself on the cliff next to God. Alexandros is a special person. He dares to try new things and most of the times he himself does not know why. He says that fortune favors the brave. His friends say that he loves his two children dearly. His routine involves rehearsals with orchestras, collaboration with many exceptional musicians and work on CrazyCello.

The Unforgettable Experience with the Scorpions on Tour in Germany

Alexandros has participated in several concerts and orchestras in various countries. His most memorable experience waswith  the Scorpions. ‘’It was great when MTV unplugged in Likavito, where I took part in the strings, asked me to participate in the tour all over Germany. I will never forget their kindness and their professionalism, both of which made the concerts a dream that I did not want to end,” he says on humanstories.gr… And he continues, “I am not someone who is famous and it surprises me when I tell people that I make music videos called CrazyCello and they say that they are familiar with the video.’’

How did CrazyCello come about? “CrazyCello came about because I wanted to give my wife a funny surprise on her birthday six years ago. I thenvideo-taped Happy Birthday. The video was perfect and I decided to put it on YouTube. That way anybody could use it to say happy birthday and it was a bid success. Many people use it to wish their family and friends happy birthday. With the passage of time, I kept thinking about making another video. Five years passed before I made the final decision. Then I made a funny Christmas video. I put on my pyjamas and played the role of Greensleeves  in my daughter’s room. I even asked my brother to do the video taping with his camera and the result was very good. I spontaneously namedthe  video CrazyCello and together with my brother, who is responsible for the sound and directing to continue with the video.

The CrazyCello did not acquire its name at random. The melody of each video develops in various crazy ways and the humour and the crazy shots, such as playing in the snow, submarines, boats floating on the bay of Meteoron, all make CrazyCello the best name. Who knows what the next video will be like?

CrazyCello Is an Idea. It is me. It is you…

The cello and the beauty of the Greek landscape are magical in and of themselves. If you combine them, you have the perfect recipe. The choice of landscape is made depending on the piece and the ideas wehave while  recording. Fortunately, there are numerous landscapes in Greece.

‘’CrazyCello is an idea. It is me. It is you. It has got many supporters and many good friends who help in organizing and in putting ideas into practice. Without them, there would be no CrazyCello. Succeeding is difficult and requires organizing planning and research. Many times we reach a place and spend all day looking for the right spotandwaiting for the right weather. Many times we have stopped filming because we did not like the place and the weather.

“There are always friends and acquaintances helping us out, and without them CrazyCello would never exist. One of my friends says,’CrazyCello is an idea. It is me. It is you.’ For example, two professional divers helped us with the submarine video, and without them I would never have been able to create such and impressive video. We met with many hardships. Filming was extremely hard because  the legs, the chair and the cello kept rising to the surface. We were in the cold February water for one hour until we finally found a way.Fortunately, for the video with the boat in Trizonia I had help from my childhood friend who also comes from Trizonia and he trusted me with his boat. This film was also difficult. I had to ride the boat with my elbow and play the cello as if it were a guitar while adjusting the speed of the boat so as to be within the shot of the drone camera. This took us all day but we succeeded in the end. I also had help from two friends in Meteora. They are climbers and they literally helped me climb from scratch in order to film “My Red Apple.” 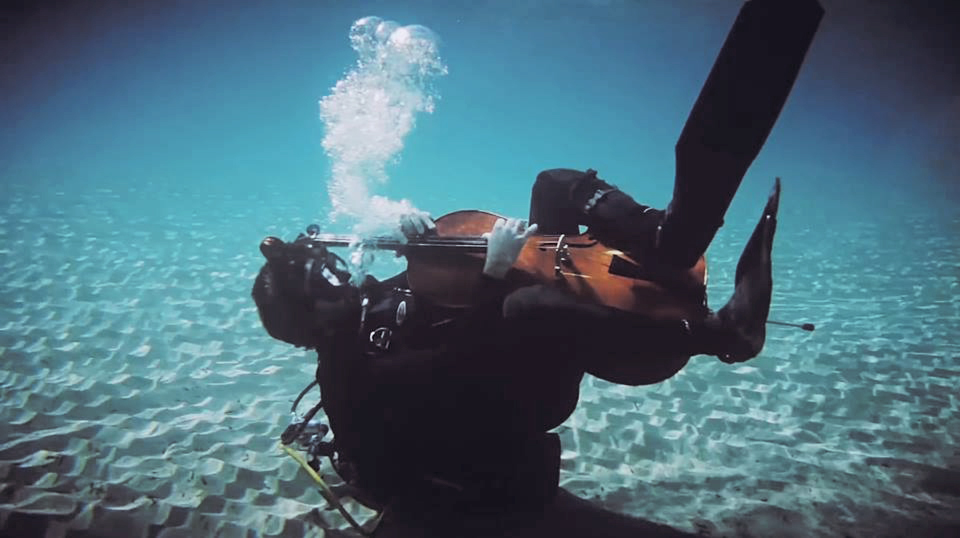 ‘’At some point I realized CrazyCello could not continue without finances. The lens of the camera had broken and there was not enough equipment. They wanted a more professional job, a new camera, lenses, a stabilizer, batteries for the drone and more. That is how the campaign idea developed. Perks are given, depending on the contributions: cups, cell-phones cases,t-shirts, hoodies, hats , backpacks and so on… Many  friends helped me during the campaign, which was crowdfunding. We could say it was money coming from crowds.” That is how highly successful the December campaign got under way, given the fact that there is a crisis in Greece. It was fun because Greeks are not used to such campaigns and there were various reactions from the people: ‘What is this campaign?’ or ‘How do I contribute?’ and ‘Are you well?’ In the end, however, I had a lot of support from people who gave me the strength and appetite for the next video.’’

Many people like CrazyCello , and this gives Alexandros and his group strength to continue. The ‘’Red Apple’’ had great success overseas. Those who never saw Greece adore her and want to see her… ‘’When people see me they become enthusiastic and say with a smile that my videos are great and that I should continue with CrazyCello. Many ask me how I went into the sea, how I climbed the cliff and what happened to the cello after the sea. There was a huge reaction on the Internet after I had uploaded ‘’The Red Apple’ on Facebook. After seeing it many people have said ,’We are going to Greece on vacation this year.’’’ 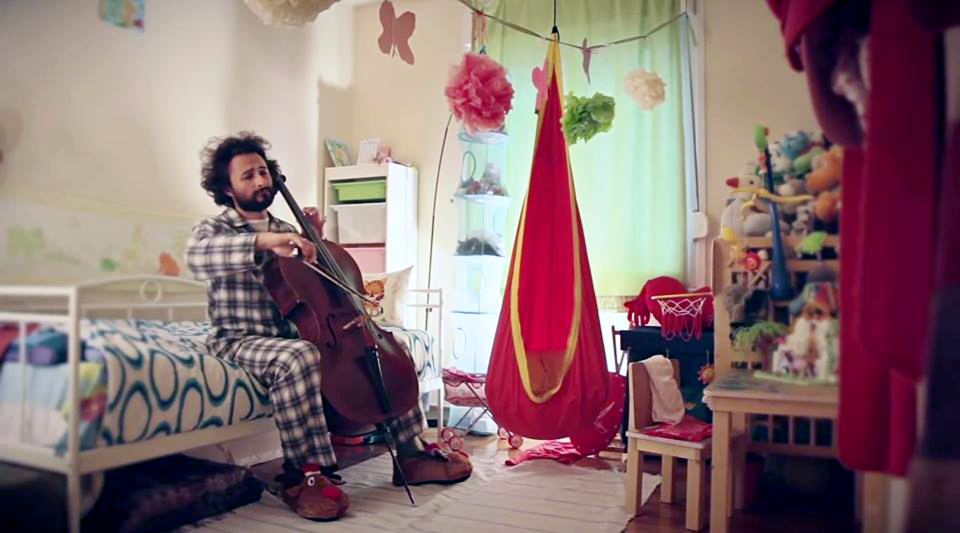 The Christmas Video where he wore pyjamas and played the role of greensleeves in his daughter’s room.

Alexandros is greatly moved when parents say their children love the video.’’The other day, for example, a mother wrote to me saying that her two-and-a-half-year-old boy loves the video and enjoys it when he sees me walking barefoot on the cliff. Others from Chile sent me pictures of their daughter who started playing the cello after watching the video. These messages are particularly moving.’’

The aim of CrazyCello is joy and a bright smile to the people. His journey is in its beginning. The best is yet to come.  ‘’Each video fulfills its aim when someone smiles. We must live our lives freely and do what we like.”

After Fifteen Space Missions, He Dreams of ‘’Introducing” the Universe to Children
Drops of “CHRISOMELO” trickling out of his lips as he talks about the Greek land!