The pain is acute and lasts. The lungs appear unable to fill with enough air. You are drowning and you think that you will die. The sounds and images around you seems to be moving slowly. You are wondering what are you doing there. Why are you in this situation? The Turkish military guards, with the glops in their hands, are watching you carefully. They are waiting to see when you will be able to breathe again. Your friends are watching frighten. As soon as you manage to breathe, they will let you go. The directive from the Turkish military jandarma is to attack the border fence of Greece. You don’t think about all these at all. You don’t want to be beaten on the chest again.  To feel the same pain again. Not even the feeling that you can’t breathe. Already, rumors that two Syrians and an Afghan have been killed in attacks by the Turkish military jandarma are hovering menacingly over the camp. There is no other option but to attack to the fence that separates Pazarkule from Kastanies. Breathe in the tear gas, start crying and feel drowning again. Pull the fence with the rope that the Turks of Jandarma gave you. Hang the hook from the armored Turkish vehicle that will start pulling the fence violently in order to uproot it. You know that  you can’t cross the fence. You’ve seen it all these days. On the other hand, the Greek army, police and FRONTEX forces are lined up so that no one passes. They also shoot tear gas canisters. And plastic bullets that hurt and cause deep bruising. If they catch you, they will beat you too in order to go back. And you’re a ball in a political ping pong. A pawn on the chessboard. And you wonder again. “What am I doing here?

Mustafa (his name is not true for reasons of his own safety) from Mosul, listens the rain hitting on the roof of his container where he lives with other refugees in the Malatya camp. He smokes a miserable cigarette that he has just rolled from the smoke sold to him by the Turkish guards of the camp. He wonders if he has ever smoked something worse in his life, but he can’t do otherwise. Malatya is not a refugee camp. It’s a prison. The fence around is high. There are cameras everywhere and observation towers in all corners. The same thoughts, with all the things that he lived in Pazarkule, are returning to his mind. With what they promised him when they took him from job with his friends on February 28 to put him on a bus and bring him to Edirne, along with other refugees from various parts of Turkey. 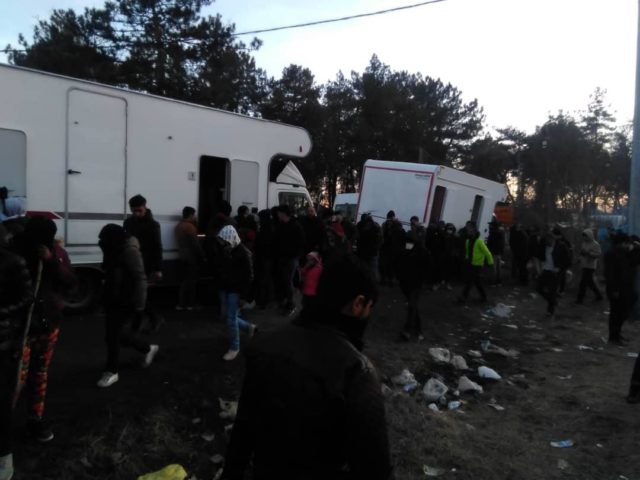 He arrived at the Malatya camp on March 27, along with about 200 other refugees from  Pazarkule. “When we came here, we didn’t know where there were taking us” he says, adding: “It was around 4.30 in the morning when they woke us up with shouting outside of our tents. They shouted at us to get out. There was panic. I left the tent and got as many things as I could. The jandarma came and set our tents on fire, with whatever we had inside. Then they told us that they did it because of coronavirus. They burned everything to eliminate the virus. I don’t know if we had coronavirus in Pazarkule or not. Many were ill and were coughing. There were no doctors to examine us. The last days, NGOs have been stopped from entering Pazarkule and providing assistance. The food was just a little. We were hungry. Only ASAM was allowed to come in and was distributing some food but only to few of us. Biscuits, a small bottle of water, a can of beans, a little juice and a sandwich. We were hungry, but every day they were coming and pushing us in front of the fence. They were asking us to attack to the fence, even though we knew nothing was coming out. We were all tired, but we obeyed because of the fear of the beating. They were hitting us in the arms, legs and chest. They knew exactly what they were doing. When they picked us up from Pazarkule, they had us on buses for ten hours until we reached Malatya and they wouldn’t let us out not even to go to the toilet. They were afraid that maybe someone of us would escape. As soon as we arrived at the camp, they took all the food and water that we had with us. They also took all of our cell phones. I hide mine and they didn’t find it. Here in the camp, I saw people who have been imprisoned since 2015. Some have told us, that from time to time they send people back to Syria”.

From war to war

Mustafa lived in Iraq during the war. “From the war I was escaping and I got myself in to another war,” he says, adding: “I’m disappointed. I don’t believe anyone anymore. The Turks told us that the borders were open and we would cross into Europe. We left our homes and jobs. We didn’t have amazing jobs, but at least we could survive. The daily wage in Turkey for a refugees is 7 dollars. In the same job that the Turks are receiving 25 dollars. We were working from morning till the night. Here the situation is tragic. The food is minimal and anyone who complains is been beaten. We have pregnant women and they don’t give them more food, nor do they bring them a doctor to examine them. “

Our conversation with Mustafa in this first contact stopped there. What he described to us cannot be confirmed, from reporters, since only the journalists of Anadolou, the Turkish News Agency, and journalists who are close to and controlled by the Erdogans government were entering the Pazarkule camp. “Journalists entering the camp did not ask what was going on. They went where they were told and only filming the good stuff,” Mustafa told us. The same things were been told to us from other, different refugees and aid workers that were active in Pazarkule.

Beats on the chest

The Israeli Information Center For Human Rights in Occupied Territories, in its report (Routine Torture) published in February 1998, refers to the tactic of beating the chest, not with a glop, but with the method of violent shaking. That is, shaking the one you want to interrogate violently, as a result of which you hit him with your fists on the chest. The chest beating method, by violent shaking is also mentioned in the “Istanbul protocol, Manual on the Effective Investigation and Documentation of Torture and Other Cruel, Inhuman or Degrading Treatment or Punishment” of the United Nations published on August 9, 1999.

When Mustafa told me about the hitting on the chest, from jandarma, I wondered why they were hitting people on the chest. I called the forensic doctor of the University Hospital of Alexandroupolis, Pavlos Pavlidis, to ask him. “A blow to the chest causes a lot of pain, but you don’t have to put a lot of force to succeed results. It leaves no marks and is easy to be done” he explained.

Turkish Interior Minister Suleiman Soylu, said a few days after the evacuation of Pazarkule that after the end of the situation with the coronavirus, any refugee or immigrant who wants to return to Pazarkule, on purpose to continue to Europe, the Turkish authorities will not stop him. Today, Friday, April 10, 2020, the 14 days quarantine of those who were on the Greek-Turkish border is completed, and as of last Monday, the discussions in the camps among refugees and immigrants had only one subject. How they will return to the Pazarkule.  Some were saying that the Turkish government will provide buses for free to take them back to the borders. Everybody was thinking about that possibility, since they no longer have anything behind. They left their homes and jobs in the cities where they lived in Turkey and they have been on the streets for more than a month. So the only way out is to go back to Pazarkule. They have already learned of Soilou’s statements, which they consider to be their brother, and they blame Greece and the NGOs for the situation they have fallen into.

Refugee fake news is perhaps the biggest problem facing these desperate people. They are ready to believe anything, no matter how extreme it may sound, as long as it brings them closer to the dream of moving to Europe. We saw it in Idomeni and last year the same period, in Diavata camp in Thessaloniki, when thousands of refugees gathered there from all over Greece, following a Facebook invitation telling them that the border with North Macedonia would be opened.

Lately, it has been rumored in the camps in Turkey, that there is a law of the United Nations that says that if they stay in a place in miserable conditions for more than 30 days, the European countries they choose, are forced to accept them. That they will be given immediate assistance of 2,500 euros and 1,500 euros a month for two years, plus an apartment to stay. As funny as these sounds, refugees and immigrants believe it.

On April 6, the camp commander in Malatya called on refugees and migrants and told them that those who wanted they could stay in the camp until the problem with coronavirus was over. If they don’t want to, they have three options. Either returns to the city of Turkey where they lived before going to the Pazarkule or return to their countries of origin, or return to the Pazarkule and from there continue on their way to Europe. The same information was given to them the next day. Already among the refugees and immigrants, there is optimism that they will soon be leaving for European countries, via Edirne and Pazarkule. 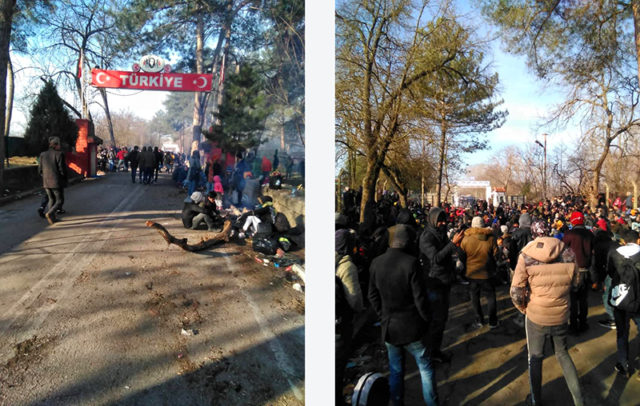 On Facebook, again on specific accounts, false information is circulating that the borders will be opened. That NGOs will prepare the camp in Pazarkule and wait for them. The latest and most tragic case is the information circulating among the refugees in Turkey that there will be too many deaths in Europe due to coronavirus and that the countries of Europe, will need people immediately to fill the gaps that will be created. They will fatally open their borders to refugees from Turkey. The false hope trade continues. Chess with human pawns has not been stopped from playing since 2015. Taking advantage of the human pain and the agony for a better and safer life. But also the ignorance of these people about what is happening on the political scene of our planet.