Life moves peacefully at the Mirsini, Peloponnese refugee camp. When I visited him, it was Ramazen and thus one did not see many adults during the day. One could see only children playing on the lawn in front of the maisonette that hosted these families. Some of the children were jumping on a trampoline and singing in Greek, “You do not pass, Mrs. Maria.” This is the result of the work done at schools by volunteers.  In fact, the functioning of the camp relies on volunteers from the region nearby.

Suddenly, the camp became alive because something happened. Some adults came out of their houses and the children got off their trampolines and started running towards the central building of the camp. The mayor of Kilinis in Androvidas ,Nambil Joseph Morant, had arrived. He is a Syrian doctor who became the first non-Greek mayor in Greece in 2014. This was in an area where in April of 2013 the “bleeding strawberries” of Manoladas were seen as a form of racism by the public.

“My election sends a strong message to all that our borough consists of democratic citizens and not racists,” says Nambil Morant andhecontinues: Our area elected the first non-Greek mayor because of the Greek government.  Before being elected mayor, I was first elected as town councillor. This was in 2002 when I first became involved with the public. In 2014 I had decided to end my candidacy, but my colleagues persuaded me to run for mayor. After long discussions both with my wife and my daughter, I decided to run for mayor. It was a very difficult decision because of the difficult circumstances in a difficult economic crisis.After the “bleeding strawberries” of Manoladas in 2013,  the  mayor of Andravidas, Kikinis was in the limelight  for the elections of the first non-Greek mayor in 2014.He was in the limelight again in 2015 when he went to the port of Piraeus to invite Syrian refugees to the camp in Mirsinis. The refugees had concentrated in Piraeus and the government could not convince them to move to government –owned camps. 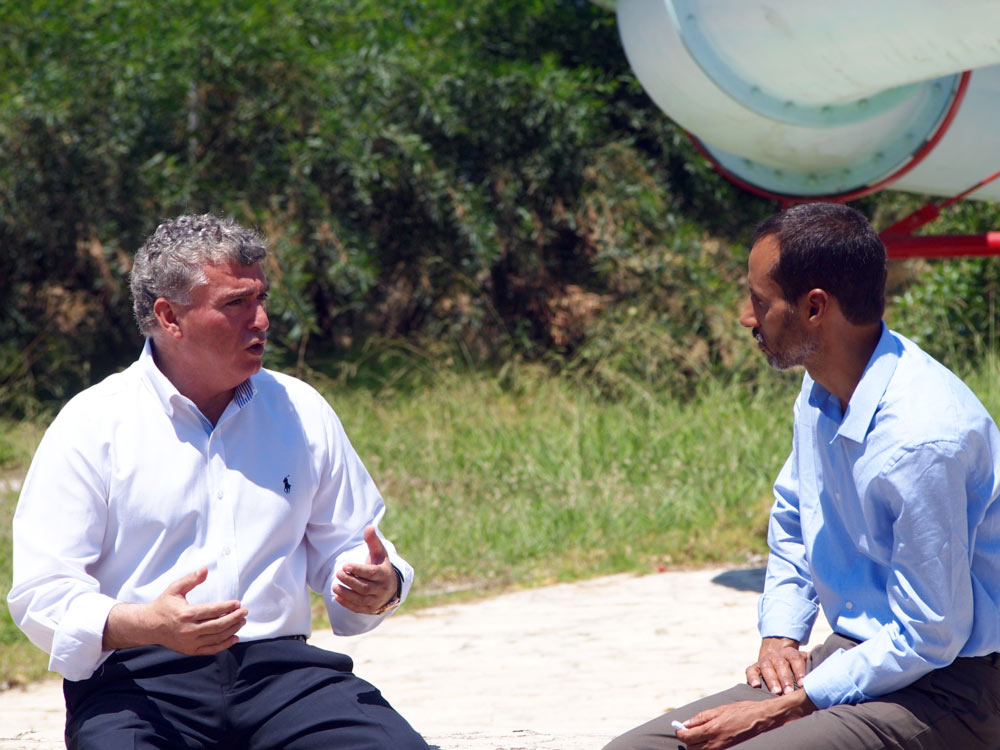 The mayor’s conversation with a journalist from Al Jajira

“I would look at Piraeus and think that something had to be done,” says Nambil Morant, and he continues: We took the issue to the town council and agreed that we had to help out in this crisis. Our proposal to host the refugees was passed by the town council, 19 votes in favor, 1 against, and 2 blank ballots. The situation was not, however, easy. People were afraid. There were some who created an atmosphere, and there was ambiguity as to who would be coming. I went to Mirsini and spoke to people. The elderly said they were afraid and that if refugees came to their town they would lock themselves in their homes. I did some explaining and their fears disappeared. The next step was to convince the refugees to leave Piraeus. At that time, they all wanted to go to the borders. They trusted no one. I decided to go and talk to them. I then spoke on the phone to a Syrian man and he managed to find families most in need. After that, some Syrian families were persuaded to go to Mirsini. In the beginning many were afraid and they wanted nothing. During the second day after their arrival there were air force drills at the military site of Andrandas and the children would hide under their beds out of fear once they heard the airplanes.  Now things have changed. When I go to the camp there is rejoicing. The children demonstrate and shout out a big welcome for the mayor.”

The refugees found at camp Mirsini are among the luckiest.  They live in maisonettes   with  a kitchen and a bathroom. They are within fifty meters of the sea, but still they are not satisfied. “We have the best personin the world who does everything to help us, and we constantly create problems,” said a woman talking about the   mayor in Andravidas, Kilinis. The refugees in Mirsinis may be living in a perfect place, but their mind is on their final destination: the place where their friends and relatives are waiting for them. Some have gone to Athens, waiting their turn to travel to northern Europe.

The History of the First Non-Greek Mayor in Greece

Just as the refugees have their minds on friends and relatives in northern Europe so too does Nambil Joseph Morant.  “I come from Homs, the city that started the first demonstrations against the regime. My mother died three months after the war had started. My father died long ago, but I still have my siblings,” he says and he continues: “I left Syria to study medicine. In the beginning I went to France, after that to Belgium and finally to Bulgaria where I met my wife. In 1990 I graduated and my wife, my newly-born daughter and I lived with my in-laws. My wife, being one year younger, would then travel back and forth from Bulgaria. In 1993 she graduated and we went to  Lehaina. I could not travel to Syria during the first five or six years. I had not yet received my Greek citizenship. In 2000 I was a soldier in Greece and  then  I  went  to Syria  every year for ten days at Easter. The situation in Syria was difficult. The Asaad  regime was cruel. In 2011 Easter fell in May and I was getting ready to travel. In March, however, I cancelled my trip because of the demonstrations in Homs. One of my brothers had left for Egypt, aother for Saudi Arabia but the rest stayed.MY nieces and nephews are I various places overseas. Some have even gone to Gabon. When the war began, I told them to come to Greece but they did not want to leave. Three of my siblings are in the city  of Tartous. There is no war there and they can also work there. Asaad’s army is there, but there are villages with a free army. The ISIS which had once been in Palmira has left.

“I have been following up on the situation since the beginning. At first, it was not Europe’s problem. Most believed the war would stop and so they went to the countries nearby. Even now there are many who hope the war will stop. One of my brothers who is a civil engineer used to sell house on land. He was destroyed due to the war. He is currently waiting for the war to stop so that he can start building again. Three to four months ago there was hop the war would stop, but that never happened. Everyone was jealous of Syria. It was a country with a civilization going back 4000 to 5000 years BC. The government was civilized. The history with the Arabs began 1,400 years ago. Even though Arabs have money from oil, they never really managed to buy brains. However, Syria relied not only oil but on shipping, trade and agriculture. Its economy was based on four or five pillars and it never had a debt. Syria has got not just Arabs. There are Assyrians from way back. What is Palmira’s relation to the Arabs? The regime was, however, cruel. The demonstrations in Homs were staged so as to prevent a state of emergency like the one in 1973. This was done in an atmosphere of terror. One would go to make a complaint and then would disappear. There were no human rights and the excuse given was that there was a state of emergency.  In the beginning there were demonstrations, then the police came, and finally the army arrived and everything was burned down.”

The fire brought refugees to Mirsine. The first non-Greek mayor of Greece is not the only one with nostalgic feelings for Syria. And he is not alone in his prayers for peace in his country. He found the refugees who in turn found a co-patriot and they all feel nostalgia as well as pray and hope together. And when you are not alone, nostalgia, prayer and hope acquire a different essence.

From Afghanistan to the «ghost house» and then to Germany!
«Mama Maria» of Samos!